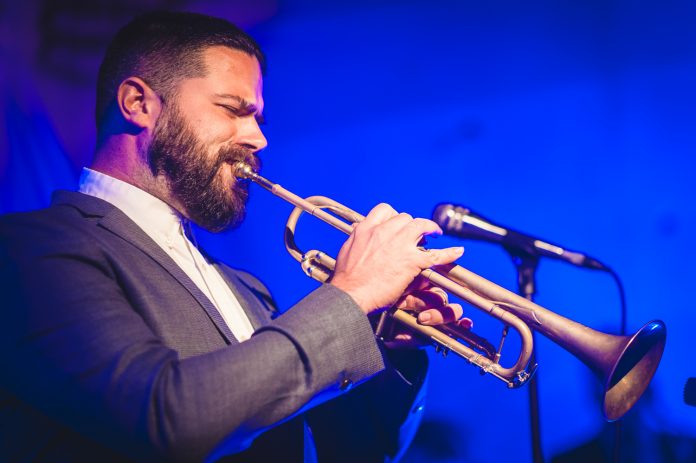 Harry James Angus has had a long love affair with Mullum Music Festival. Harry was Festival Patron in 2014 and 2015 and programmed one of the festival venues, he’s been involved in every community aspect of Mullum Music Festival from the Youth Mentorship Program to the annual street parade and he’s one of the Mullum’s most loved artists having performed countless times in a myriad of musical guises since 2010.

So it’s only fitting that Harry James Angus will premiere the full nine-piece incarnation of his new live project ‘Struggle With Glory’ at Mullum Music Festival this November. A true musical chameleon, Angus continues to cross boundaries with ‘Struggle With Glory’, transporting classic Greco-Roman myths into a surreal world of old-time jazz and gospel music.

If you like toe-tapping, humming in the aisles, sweating and shouting, but don’t particularly like going to church much, why not try shouting Zeus instead? Revenge, giant beasts in strange lands, the doomed love affairs of Gods and men, and the unstoppable torrent of fate is served up with rich vocal harmonies, barrel-house piano and the unmistakeable sound of Harry James Angus’ old dented trumpet.

“As usual it’s a pleasure and a privilege to be able to perform with a bunch of my favourite musicians at Mullum Music Festival,” says Harry James Angus “I would say that I’ll try my hardest but I know I don’t have to, it’s always effortless with such great people to play with, and to play for. We’ll keep it pretty loose.”

While the intimate Parlour version of the ‘Struggle With Glory’ show, that will see Harry perform in people’s homes and lounge-rooms throughout Australia, has been booked out, Mullum Music Festival will be the first time people will get to experience the show in its full festival glory.

Ride the road to glory at mullummusicfestival.com