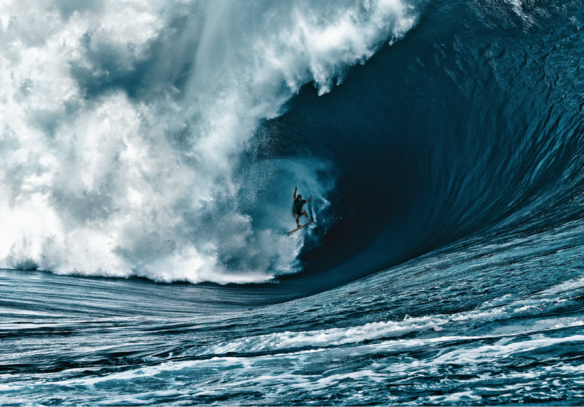 Whether there’s chaos in those crushing waves or a sense of tranquility, a touch of foreboding or a call to adventure – the ocean is a matter of perspective. That much is clear when each year Byron Bay Film Festival puts together a program awash with surf films from home and abroad.

Heavy Water (Michael Oblowitz)
A certain highlight in this year’s festival program is the world premiere of feature length documentary Heavy Water, the latest from renowned South African filmmaker Michael Oblowitz. The film takes a close look at surf-world royalty Nathan Fletcher and his relationship with big wave surfing, tracing his lineage back to his grandfather, one of the pioneers of Oahu’s North Shore, and examining the consequences that Fletcher and his friends have faced in the pursuit of their passion for big waves. Undertow (Peter Spann)
Fresh out of rehab, all Bella wants to do is to make it through her first day clean.
But when her ex-lover, the mysterious Jonny, wants her back, Bella is straight into a burgeoning market business and life with her drama-seeking friends, a potential new love and a party that holds secret revelations of betrayal conspire to break her will.

Blue (Karina Holden)
From the beaches of Byron Shire, the ocean looks in pretty good condition. But we all know there’s a bigger story, and the must-watch documentary Blue tells that story.

Half of all marine life has been lost in the last 40 years and by 2050 there will be more plastic in the sea than fish. 90% of the creatures living in Australian oceans occur nowhere else in the world, and have nowhere to go if we don’t protect them. Featuring passionate advocates for ocean preservation, and filmed in the seas surrounding Australia, Indonesia, the Philippines and the US, Blue looks at how the very nature of the ocean is being altered.

Lumiére (Tay Steele)
From Hawaii to Tahiti, Lumiére takes us behind the lens of North Shore photographer Amber Mozo, to find what the ocean gives to her in spite of what it took away.
Director, writer and producer Tay Steele has spent the last three years honing his craft, working to establish himself as an up and coming filmmaker. He has been featured in several action sports magazines including SurferMag who said of his work, “In a time when the surf world needs fuller storytelling and fresh vision, Taylor (Tay) might just be that new face who brings it back around.”

Program available and tickets on sale now via www.bbff.com.au.