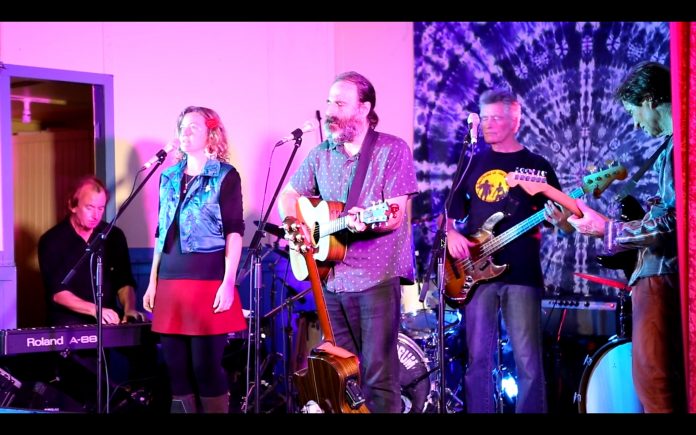 Hanuman began his career in the USA, playing live and recording with Jai Uttal, Ram Dass, Mirabai, On Wings of Song, Michael Thompson and Esther Satterfield among others. Having moved to Australia from the East Coast of the USA in 1983, Hanuman’s ‘song drumming’ style saw him working live and/or in the studio with Tim Finn, Savage Garden, The Whitlams, 1927, Jerry Beckley, Slim Dusty, Troy Cassar-Daley, Graeme Connors, Anne Kirkpatrick and Peter Blakely. Hanuman is a two time Golden Guitar winner as a member of The Flying Emus, an ARIA nominee for Comedy Record of the year and has been inducted into the Australian National Archive for his parody of the 2010 Australian election ‘I see red’.

While this has all been supremely fun and he has gotten to play and enjoy some awesome music in Australia over the years, just the same in the background he has been craving, no wait, make that “jonesing” for some Good Ol’ Grateful dead Style music to make it down here. And now, after 30+ years, he has given up!

DEADSET​ is the musical expression of the old saying: “If you want it done?… get your own damn jam band together dude… I mean, mate”

As a group who are Gratefully inspired by the Dead, DEADSET​ seek not to recreate the past but to share and move the Grateful Dead energy family and experience forward ! (and most importantly to enjoy the ride!)

DEADSET​ are a band of merry minstrels who along with Hanuman – (Guitar, Drums, Vocals), can include the likes of Vasudha Harte – (Vocals, Accordion), Azo Bell – (Guitars and Vocals), Alan Park – (Keyboards), Rod Coe – (Bass and Vocals), Peter Wilkins – (Drums). And just for the record – they’re “Not All Dead”, as DEADSET​ includes some great tunes by kindred artists in their sets.

Learn more at www.deadsetband.com and on the Facebook Page