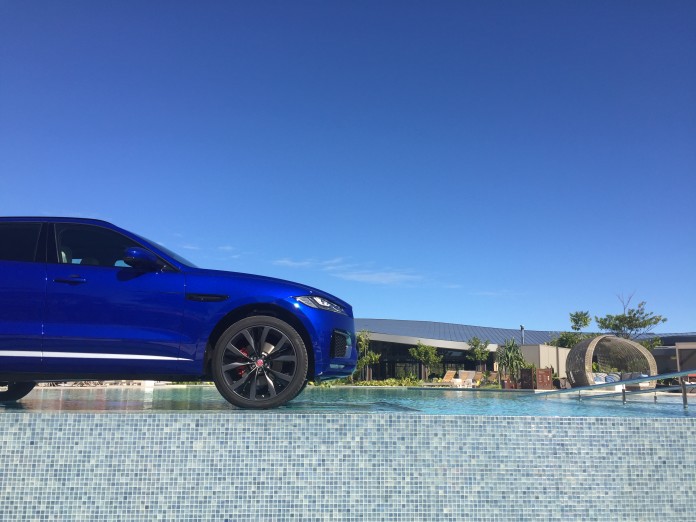 On the 29th of July Byron Bay said goodbye to Jaguar Land Rover Australia, who had spent the past three weeks in the popular coastal town launching the prestigious Jaguar F-PACE Performance SUV.

Held at the new Elements of Byron beachfront resort, the launch saw 402 delegates from Jaguar management to dealers, sales representatives and media celebrate automotive excellence within the resort’s lavish leisure and business precincts.

“We were delighted to be announced as the venue to host Jaguar Land Rover for the launch of the new F-PACE” said Joan Loewensohn, Elements of Byron’s Conference and Event Director. “After months of hard work it has been tremendously rewarding for both myself and my team to be involved over these past three weeks – to be able to showcase the vehicle through our event spaces”. One of the 38 Jaguar F-PACE SUV’s brought to Byron for the launch was installed over Elements of Byron’s 850,000 litre infinity lagoon pool, providing the effect of driving on water. Lit nightly, the installation added a “wow” factor for resort visitors and guests. Other vehicles were exhibited at the resort’s premium beachfront location Heart of the Bay overlooking Belongil Beach.

“This event has provided a powerful opportunity to share the beauty of the Byron shire” said Loewensohn. “We have received rave reviews about the region when delegates return from test driving throughout the hinterland”.

Jaguar Group’s Product and Planning Manager Brett Lewis-Driver describes the event as “Jaguar’s best launch ever”. “The state of the art accommodation and conferencing facilities at Elements of Byron have allowed Jaguar to deliver a world-class event” said Mr Lewis-Driver. “The management and staff have provided exceptionally high levels of customer service”.

Elements of Byron is gearing up to host the Byron Writers Festival from August 5 – 7 for their 20th Anniversary event. The Festival, which is held among the elements across the 200 acre site, has called the Elements of Byron property home for 18 of the past 19 years.

“Large conferences like this Jaguar launch at Elements of Byron are fabulous for our Shire” said Byron Shire Mayor Simon Richardson. “It’s often the first visit for many delegates and whilst they are here to work, they always get out and about and spread the investment”.