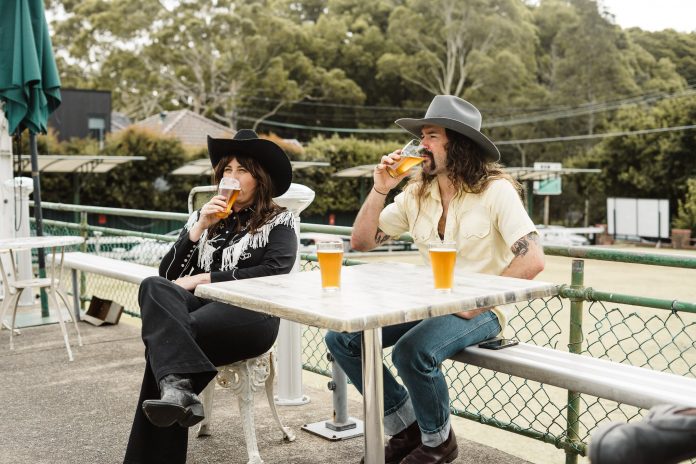 Newtown legends Young Henrys are kicking off 2021 with a bang, dropping a new collab beer ‘Bowlo Bitter’ with local favourites, alt-country/folk band Caitlin Harnett & The Pony Boys. Available in kegs only at select venues, Young Henrys are sending the band on an East Coast tour to celebrate, hitting some of their favourite bowling clubs in NSW.

Check out their hilarious Tarantino-esque video featuring head brewer Jesse Searls getting into a banjo duel with Caitlin Harnett, shot by Yeah Rad.

‘Bowlo Bitter’ is a thirst-quenching beauty, deep gold in colour with subtle grassy overtones from some good old Aussie Cascade hops. Inspired by the band and brewery’s joint love of the local bowlo – a place where you can enjoy a frosty schooey of amber nectar in your hand, grass between your toes and the dulcet country tones of the breeze.

It was a huge year for Caitlin Harnett & the Pony Boys in 2020. After landing “Best Live Act in NSW” at the Nation Live Music Awards, and selling out multiple Sydney shows, the alt-country local darlings released their debut studio album, “Late Night Essentials” to critical acclaim. The album is a whisky-drenched, emotionally rich album, which has been blaring through the brewery speakers since its release back in November.

Young Henrys is a brewery born from a simple idea: brew beer their local community would enjoy and be proud to call their own. As the brewery grew, so did their community, working with like-minded folk who have led the voices of authority on music, art, culture and community. This collaboration is no exception, creating a delicious and unique beer, while supporting local musicians and some of the state’s finest Bowlos.

Kicking off in Newcastle on Thursday January 21st, the ‘Bowlo Bitter’ tour will head to Adamstown Bowlo where Caitlin Harnett & the Pony Boys will be joined by James Thomson on support. Next, the band will head north to Bangalow Bowlo in Byron Bay playing tunes up north with Brisbane band Jollee on Friday, January 22nd.

Heading south to Wombarra Bowlo in Wombarra next with good mate Lady Lyon. Picture an arvo of live music and beers overlooking Sydney’s glorious south coast, before heading home to Petersham Bowlo on Saturday January 30th for one last hurrah, supported by Papa Pilko and the Binrats.

Whether you’re watching the band from the shade of your Akubra, chucking flippers on the rink or just spectating from the sideline, ‘Bowlo Bitter’ is a beer to be enjoyed by all.
Young Henrys ‘Bowlo Bitter’ will be available from mid-January in select venues and Bowling Clubs.