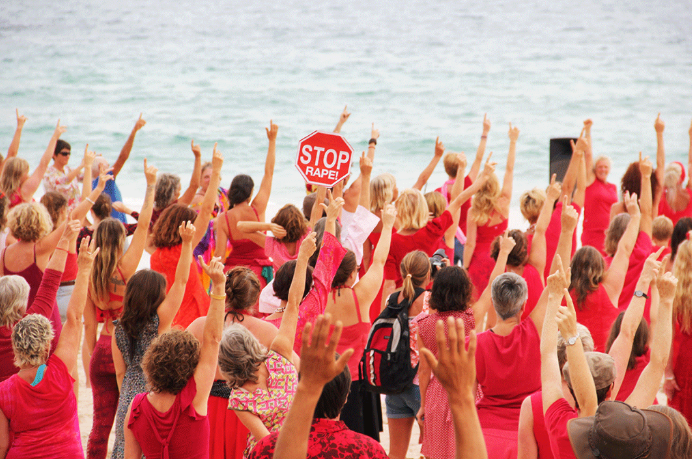 One Billion Rising is the biggest mass action to end violence against women in human history. The campaign, launched on Valentine’s Day 2012, began as a call to action based on the staggering statistic that 1 in 3 women on the planet will be beaten or raped during her lifetime. With the world population at 7 billion, this adds up to more than ONE BILLION WOMEN AND GIRLS. On 14 February 2013, people across the world came together to express their outrage, strike, dance, and RISE in defiance of the injustices women suffer, demanding an end at last to violence against women.

On 14 February 2014, One Billion Rising for Justice focused on the issue of justice for all survivors of gender violence, and highlighted the impunity that lives at the intersection of poverty, racism, war, the plunder of the environment, capitalism, imperialism, and patriarchy. For the third year of the campaign, One Billion Rising’s global coordinators chose the theme of “Revolution” as an escalation of the demand for justice, and to build upon the massive efforts of communities worldwide that also looked at the roots and causes of violence as part of their call for justice.

On (or around) 14 February 2015, millions of activists in over 200 countries gathered to Rise for REVOLUTION, to change the paradigm, demand accountability, justice and systematic CHANGE. We are rising to show we are determined to create a new kind of consciousness – one where violence will be resisted until it is unthinkable. In 2016, the theme of Revolution continues with a call to focus on marginalised women and to bring national and international focus to their issues; to bring in new artistic energy; to amplify Revolution as a call for system change to end violence against women and girls*; to call on people to rise for others, and not just for ourselves.

*Women and girls is an inclusive term reflecting all those who were assigned and/or identify as female.

This year, as the movement evolves into its fourth year, activists are invited to create and incorporate fresh new versions of “Break The Chain” into their rising events. Already communities around the world have adapted, localised and completely re-envisioned the choreography, in many places integrating the dance into their cultures so that it remains current and relevant. These incredible dances, as well as innovative versions and adaptations of the original choreography, have been shared throughout the campaign; they are unique and inspiring.

Organizers and risers are encouraged to continue to localize their artistic expressions by using any version of the choreography your community chooses including the original choreography or a new set of moves that express the energy and message of One Billion Rising: Rise For Revolution for your communities, groups, and networks. Or multiple versions, there’s no limit to how many ways you can DANCE!

Break the Chain and DANCE for Revolution!