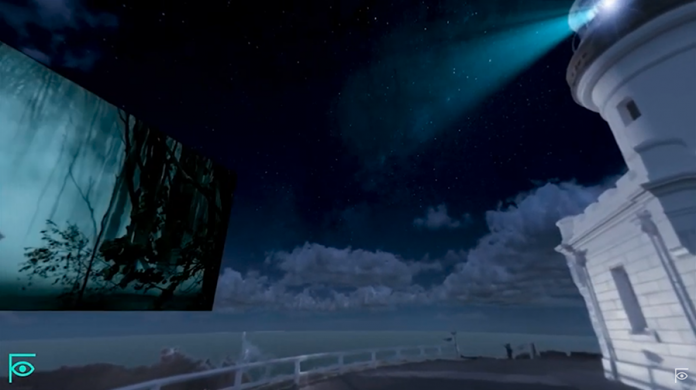 The Special Edition Byron Bay International Film Festival will bring Byron to the world with the help of Virtual Reality on Saturday 31st October, from 7 pm.

For those who can’t get to Byron, the BBFF team has created a virtual festival event unlike any other. In what will be a magical 360° experience, the festival will create a state-of-the-art virtual Byron Bay Theatre, where a movie screen hovers on either side of Byron’s iconic lighthouse, under a full moon.

Participants won’t need VR goggles to join in, as the event can also be accessed on a phone, tablet or PC. Those lucky enough to be armed with a VR headset can, however, jump in and experience it in its full immersive 360° glory.

The festival has chosen to use this unique Virtual Reality Theatre to screen 10 short films made by the 2020 Young Australian Filmmaker of the Year nominees, aged from 17 to 24. Judges for the competition include David Stratton, Richard Wilkins and David Wenham, (who watched and rated the films whilst in quarantine on the Gold Coast, before joining the set of Baz Luhrmann’s latest production Elvis).

J’aimee Skippon-Volke, BBFF’s Festival Director, says: “We thought it would be apt to utilise the brand-new space of Virtual Reality to highlight brand new cinema talent. This screening traditionally sits just before our Closing Night Gala, and usually every nominee is in attendance. With 1/3 of our 2020 nominees living in Melbourne we felt that it was important to create a screening that every filmmaker could take part in.”

For information on BBFF Young Australian Filmmaker of the Year Nominees, go to: www.bbff.com.au/young-australian-filmmaker

To access the screening (on the night) go to:
www.bbff.com.au/virtual-reality-theatre OR www.byronbay.com