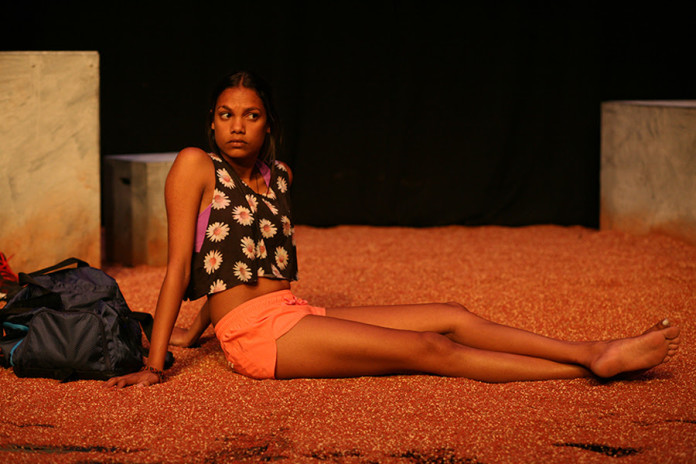 The award winning Australian play SUGARLAND created by national youth theatre company Australian Theatre for Young People (ATYP) and inspired by the young people of Katherine in the Northern Territory will be coming to NORPA at Lismore City Hall on 3&4 May as part of a national tour.

Sugarland provides a glimpse into a teenage Australia that feels like a foreign country. This haunting play will make you laugh, cry and stay with you long after you leave the theatre.

Nina is 16 years old, good at school, has a job at the cinema and one of the best singing voices around. But none of that is important. She needs a place to live. Living with her Aunty in an overcrowded house, things aren’t going well, and it’s getting complicated. Erica is 16 and the new girl in town. Her Dad’s in the RAAF and the family’s just moved to Katherine. She’s lived all over Australia and every time makes somewhere home, she moves again. She’s so used to being an outsider, she’s stopped trying to fit in. The only thing they have in common is the music they listen to. Sometimes that’s enough.

In 2011, playwrights Rachael Coopes (Art House) and Wayne Blair (The Sapphires, Bloodland, The Gods of Wheat St) engaged in a series of residencies in the town of Katherine (NT). The aim was to create a story that would allow audiences around the country to gain a personal understanding of what life is like growing up in remote Australia. With over two months spent time in this unique place gathering stories, making friends and writing, the result is this extraordinary new play.

ATYP artistic director and co-director of the work, Fraser Corfield explains why he is so excited about the play. “I love that Sugarland presents characters we simply don’t see on Australia’s professional theatre stage. These characters are raw, honest, at times painfully inarticulate and at others breathtakingly eloquent. I believe this is one of those rare theatre experiences that sets a new direction in our national industry. In this case that direction involves a teenage identity that is cultural diverse but completely Australian. The events in these young people’s lives are unbelievable but common, deeply moving and profoundly political.“

Over the past three years ATYP’s professional co-productions have received industry acclaim, challenging expectations of ‘youth theatre’ and winning awards locally and nationally (Medea, M.Rock, a Town Named War Boy). Sugarland National Tour is the first for ATYP in over 10 years. The tour along with an extensive community engagement program connecting local youth with support services is produced by national creative producers Performing Lines through the Australia Council’s Blak Lines Indigenous Touring Initiative.