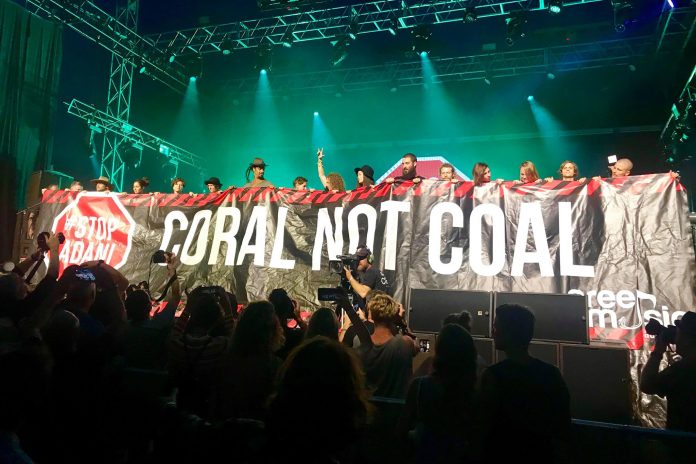 Musicians from across Australia have put the #StopAdani campaign firmly centre stage to a 100,000 strong audience at Bluesfest this Easter, calling for an end to polluting coal mining in an age of climate change, and rallying punters to sign up to support the cause.

After numerous musicians have worn campaign t shirts and ear rings on stage and spoken out about the critically important environmental issue, the high point was a show-stopping concert moment with ten high profile artists and a leading campaigner joining The John Butler Trio on stage, Sunday 1 April, 10.15pm.

Traditional Owner of the land on which the mine is planned to be built, and world-renowned digeridoo player, Adrian Burragubba of the Wangan and Jagalingou people, will lead the moment with a short speech while a huge banner is unfurled.

John Butler says, “Coal has had its time. We need to give renewables everything we’ve got now. We must stop this mine. If we allow Adani to go ahead, the mine will not only be the one of the world’s largest, it will be one of our generation’s greatest regrets. We owe it our children, and their children’s children, to make sure this environmentally reckless mine never sees the light of day”.

The artists are rallying punters to sign up to the campaign at www.stopadani.com.