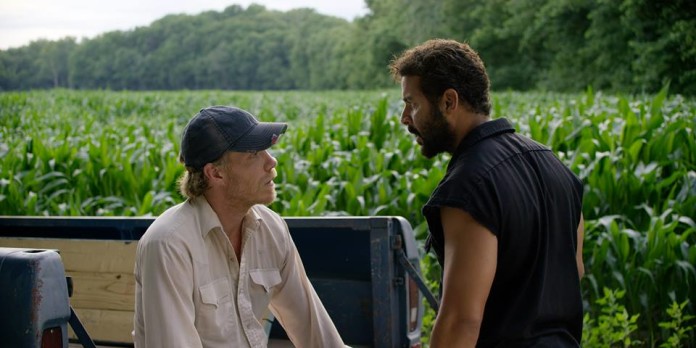 Director Kyle Ham’s directorial debut is an intense psychological drama teetering on the precipice of redemption, an exploration of his interest in telling character driven stories that highlight the individual’s struggle with themselves and their world.

Air Force veteran Bob Stevens disappeared into small town life eight years ago. He’s got a fruit stand, a daughter wise beyond her years and a wife trying to do the best by her family.

When Jerome rocks up claiming to be his best friend from the air force police, the simple life Bob has built for himself begins to unravel at the seams.

Can the mysterious stranger be trusted?

Can Bob piece together the clues of his forgotten past, hidden in his daughter’s art, and work out what Jerome is up to before the whole thing comes crashing down?

Brody Behr delivers a stand-out debut performance as the loyal companion only Bob can see; his enigmatic air force buddy is played by Jon Huertas, best known for his role as detective Javier Esposito in American crime drama Castle.

Troubled ex-cop Bob is played by experienced actor Marc Menchaca, who has appeared on several television series, including the political thriller Homeland.

Reparation is an award-winning independent feature currently screening in theatres around America.

Reparation will screen on Tuesday, October 18 at 5pm at the Byron Community Centre.

To buy tickets or a Flexi-Pass, you can download the Ferveapp on your iPhone or Android. You can also buy online at www.bbff.com.au or in person at the Byron Community Centre.