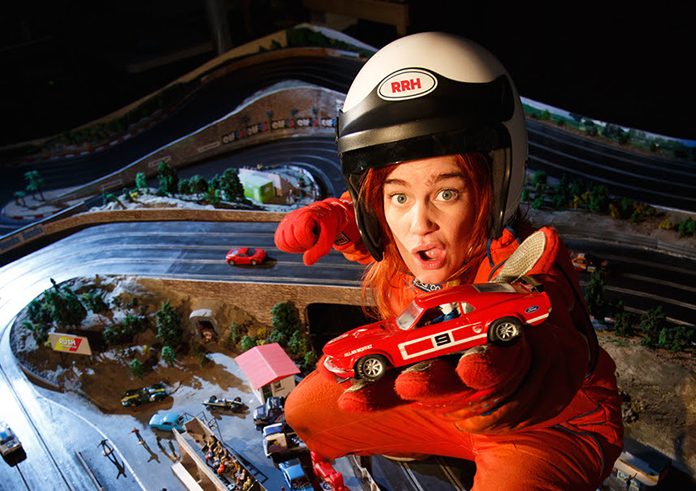 In Red Racing Hood Terrapin Puppet Theatre reimagines everyone’s favourite characters from the famous fairytale into the small town of Grinalong. When the new mayor announces the return of the local motor race, the Grinalong Classic, the whole town is excited. But the race will go through Tangled Woods, where a giant wolf is rumoured to live.

With everything she knows and loves at stake, Red must convince her mechanically savvy Gran to let her compete and overcome her own fears in the process.

The story is inventively brought to life using slot car racing, with cameras situated around the circuit magnifying the action live onscreen, putting the audience in the driving seat as they follow Red on her adventure.

Featuring wonderful performances, a high-energy soundtrack and the puppetry that has made Terrapin famous across the globe, Red Racing Hood is not to be missed. Catch it before it races away!

Workshop
On Friday 31 August the cast will conduct a fun workshop at Macadamia Castle for pass-holders and local schools featuring games, storytelling, improvisation, acting and more – giving kids the opportunity to act out their heroic, villainous and monstrous imaginations in a safe and tremendously fun environment!

Terrapin designs its productions to tour and aims to have its work presented to diverse audiences globally. Many of its works are designed so they can be presented in languages other than English through the engagement of local artists wherever the work is presented.