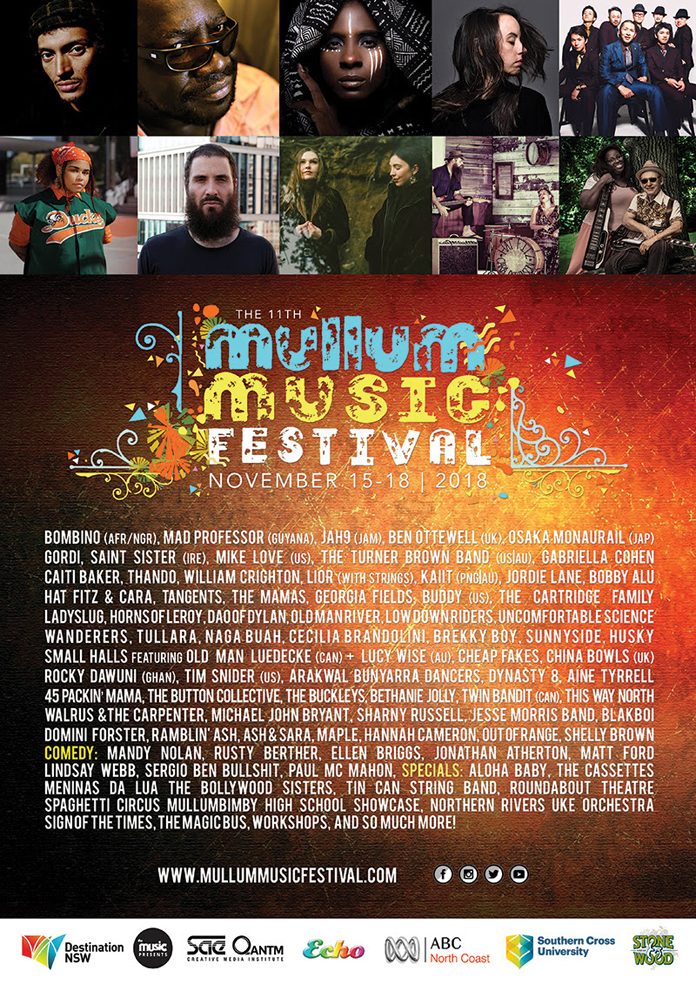 We are excited to announce a 3rd round of mighty acts to join our already brilliant lineup!
www.mullummusicfestival.com

Diversity. Community. Equality! That’s the vibe that underpins Mullum Music Fest, the popular small town festival that’s on every music lovers’ bucket list. With headline acts like Nigerian Bombino, Guyana’s Mad Professor, Jah9 from Jamaica, and Osaka Monaurail from Japan bringing the music of the globe to the stage, the festival also brings the local music to the globe with its third announcement celebrating the immense talent of the region.

Festival Director Glenn Wright is committed to continuing this festival’s exciting trajectory with a line up that is all about inclusivity.

‘I think when we say diversity and equality, it is of nations, gender and music styles. There is also a common thread of good quality music, and we are very aware of the local arts scene, our community, and try to include as many of these artists each year.’

There’s one sure way of telling Mullum Music Festival is about diversity and that’s by having a look at the audiences. There are children, older people, teenagers, mothers, fathers, young adults, babies – all dancing, listening, walking the streets and generally vibing along at the shows. Inclusivity was the festival vision 11 years ago, as it continues to be in 2018.

This year, joining the stellar line up is Mullumbimby resident, Irish singer songwriter Aine Tyrell. Story is at the forefront with her latest offering ‘Return to the Sea’ written and recorded in her homeland but mastered on her return here. Due for release in 2019, Tyrell will be showcasing her incredible new songs at Mullum Music Festival this year. Also from the Northern Rivers comes Bethanie Jolly, with her rich folk style coloured with splashes of old time blues and deeply moving soul. Other local treasures include jazz legend Sharny Russell, chanteuse Shelly Brown, the wild banjo of The Button Collective, the magic of Ash Bell and Sara Tindley, and so much more.

Bringing Melbourne to Mullum is singer songwriter and musical story teller Lucy Wise – on the back of her 2018 release Winter Sun, a tapestry of rich soundscapes varying from the lush to the raw and pared back.

Festival favourites Husky are back. Ever since their return from Berlin last year there’s been a whole new buzz about Husky. Also along for the ride is Canada’s Old Man Luedecke, the singer songwriter and banjo player from Nova Scotia with a penchant for narrative driven folk songs that rare playful, coy and soul warming.

But it’s not just about the music, there’s an Art Exhibition you can catch as you stroll between venues at the BSA, flash mobs by the 80’s divas The Cassettes, full freaky fun on the Magic Bus, local choirs, ukulele battles, and of course, the highlight of every event, the Sunday street parade where New Orleans meets the Horns of Mullum and that audience, those babies, teenagers, children, mothers, fathers, grandmothers and grandfathers are all dancing shoulder to shoulder, or even hoisted onto shoulders in a giant celebratory caucophany of brass.

This final announcement for Mullum Music Festival deepens the program, ensuring that for four days in November, in a world where words fail, music speaks.