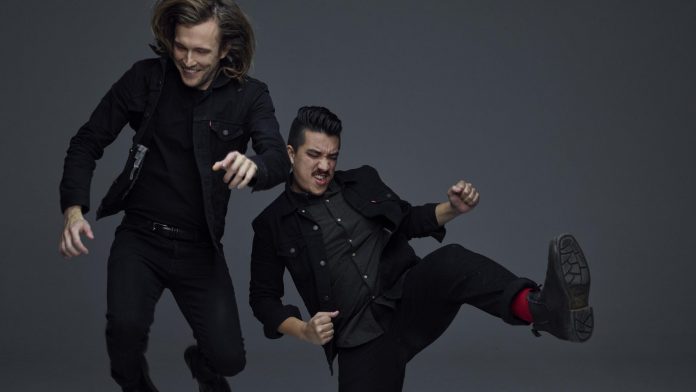 One guitar. One voice. One drum kit — frequently bloodied, sometimes broken. The modest tools can only begin to tell the story of Polish Club, the sweat-soaked Aussie soul-punk duo with a heart-wringing knack for ass-kicking rock tunes and a gift for burning down every room they play.

“I think our strength is in the limitations of the two-piece band,” says the keeper of the aforementioned drums, John Henry. “When you’ve only got guitar and drums, you can’t just… play. You’ve got to give more. Physically.”

As the blood on his knuckles attests, that’s the way it goes when he and singer-guitarist Novak hit the decks. That’s both on stage, where they’ve left a simmering throng of devotees dripping and spent across their home continent, and on the prolific run of pulse-palpitating singles that have kicked holes in polite company since “Able” and “Beeping” announced a garage revolution.

“I knew he was a drummer and I think he knew I could sing,” Novak says of his formative musical conversations with an occasional drinking acquaintance around Sydney’s north shore. “It was his idea: ‘Hey, how about we just book a room for three hours and see if we can play together?’ That was about it.”

The result — the savage swing of vintage rock’n’roll colliding with the pleading pitch of classic, gravel-gargling soul — was “just about playing to the strength of the people involved,” John Henry shrugs.

“We play hard and fast and loud with kinda simple guitar lines, and Novak has a voice that manages to push a lot of air. We probably sound so big because his voice is actually physically very loud. Like, if he sings without a mic in a room, you can’t talk to the person next to you.”

Like you’d want to. Polish Club’s combined energy simply defies belief, testament to a chemistry that’s maybe one part plan and nine parts feeling. Yes, for those with a literal bent, there is a Polish connection binding their respective backstories. But the duo is better understood in terms of explosion than exposition.

Polish Club will be joined by local bands Wharves and Captain Squidlicka & The Sinking Ships for a huge long weekend show this Sunday at Byron Bay Brewery. Tickets are available from Eventbrite.