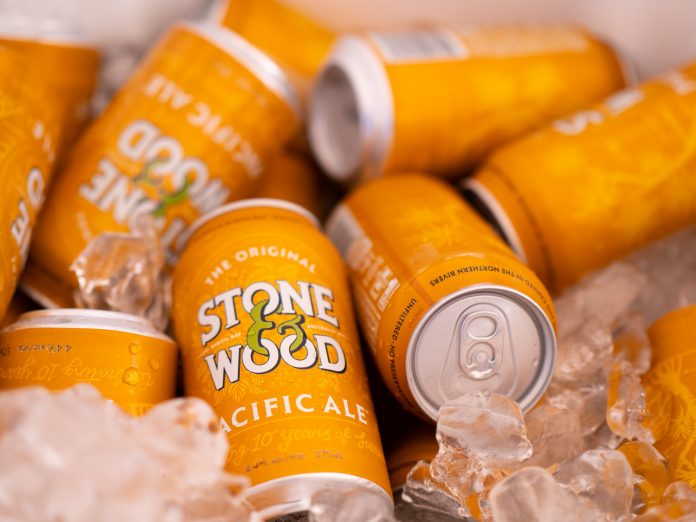 It’s been 10 years since the first kegs of this national favourite rolled out of the brewery’s gates. Co-founder Brad Rogers said that after releasing the commemorative limited release cans in December to celebrate their anniversary, the middle of summer is the perfect time to bring them out ongoing.

When the founders of Stone & Wood sat around the kitchen table dreaming up what would become the original Pacific Ale, their inspiration came from what they envisioned to be the perfect occasion…

“Imagine a hot summer’s day in Byron Bay and you’ve just come out of the ocean. The sand’s scorching as you walk off the beach, across the pandanus lined park where everyone’s lazing in the shade and into the pub. The salt’s still drying on your back and all you feel like is something that’ll quench your thirst.” Conjures Brad.

With its big fruity hops, cloudy haze and a refreshing finish, it is a beer that can be enjoyed after catching a wave, a band at the pub or with mates.

Its distinctive flavour and approachability have earned it numerous awards, including coming in the top three of the Hottest 100 Australian Beer Awards (similar to the Triple J Hottest 100… except for beer) for the past eight years and it has taken the annual competition out, sitting at number one, four times.

As demand has continued to grow… the question of when the regional brewery would put Pacific Ale in a can kept coming up.

“From when we first released the original Pacific Ale, our customers and our drinkers have begged us to put it in a can. Up until now, our focus has been on making enough of the stuff, so we’re pumped to be able to finally put it in cans ongoing,” said head brewer, Caolan Vaughn.

Caolan said around this time of year, pairing a couple of cold Pacific Ales with seafood is ideal.

“As the arvo breeze kicks in (hopefully), you can’t go past fresh locally caught seafood and something like a simple mango and chilli salad, washed down with a couple of cold Pacific Ales.” he said.

Pacific Ale in cans will be released nationally from 22 January. Jump on Stone & Wood’s Beer Finder from Tuesday to find a location closes to you for cans, bottles or to enjoy it on tap. It will also be available from their online store: www.stoneandwood.com.au/beer.html