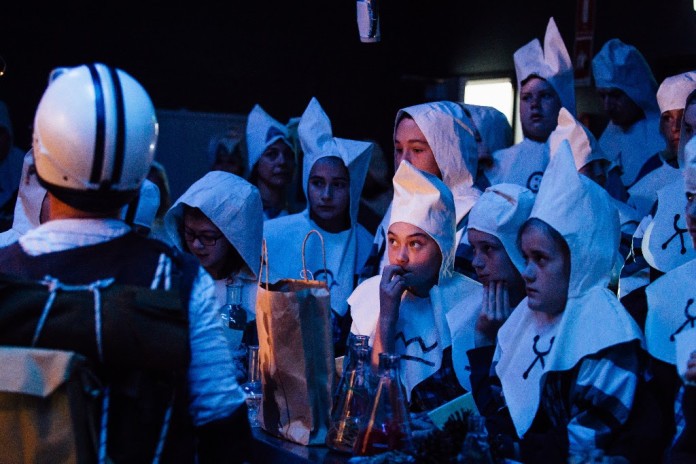 To celebrate Book Week (22-26 Aug) more than 500 school children from across the Northern Rivers region of NSW experienced a new interactive theatre work Journey to an Unnamed World created by NORPA in partnership with the Catholic Schools Office, Lismore Diocese.

The theatre company turned the entire bottom floor of Lismore City Hall into a theatrical adventure for children in which they became part of the performance.

For 10 months leading up to Book Week, NORPA have been working with the Catholic Schools Office, students and teachers to create the new work. The project commenced months before the actual performance with workshops in classrooms, curriculum based activities and each child creating a passport that was needed for their entry and participation in the Unnamed World.

Once at Lismore City Hall, children were immersed in a fantastic maze-like set that occupied an entire floor of the building including storerooms and the kitchen. Children interacted with each space on a quest to help one of the characters find her lost Self. They were taken on a journey of discovery that included sound, projections, physical theatre and music. “The aim of Journey to an Unnamed World is for children to experience a new way of interacting with theatre in a visceral, site-specific work,” said co-director Julian Louis, Artistic Director of NORPA “It is designed to stimulate children’s imagination, literacy and their notions of what theatre can be.”

“The themes in the work are targeted towards helping Year 5 and 6 students better understand the challenging issues they face such as self-confidence, self-identity, empathy and anxiety” says co-director Valley Lipcer, Artistic Director of Roundabout Theatre.

“Journey to an Unnamed World brings the talents of great teaching and great performing arts together,” says Paul Thornton, Assistant Director Education Services, Catholic Schools Office, Diocese of Lismore. “We want to inspire children through an interaction that leaves a lasting impression and helps to build their love of literature into secondary education.”

“The partnership between NORPA and the Catholic Schools Office demonstrates how the community can come together to support students. Here we have people of skill and enthusiasm from different backgrounds working on a joint project that has never been attempted before,” says Thornton. “In our partnership with NORPA we have found new friends, appreciated new methods and seen teaching in a new light.” Judging by the looks on children’s faces and their comments, the project has been a huge success.

“That was awesome! The best fun ever!”
“It was about finding yourself and not judging yourself.”
“It was about being brave and trying to stand up and knowing who you are.”
“It was really exciting and full of joy!”
Said a group of children from St Joseph’s Alstonville who had just emerged from the show.

“It was beautiful seeing how engaged the kids were,” said teacher Lyn Rawling “We are so lucky to have access to experiences like this in the Northern Rivers.”

“Journey to an Unnamed World fits in perfectly with the curriculum,” said teacher Nicky Wagner “We’re currently studying a multimodal form at school where we’re encouraging the children to explore different ways of expressing a storyline and their imaginations – Journey to an Unnamed World was a beautiful example of how you can use a whole palette of different forms to express yourself. This is contemporary learning at its best.”

NORPA are so proud of the outcome they hope to develop the concept so that a similar work can be produced as part of their Theatre for Schools program in 2018.