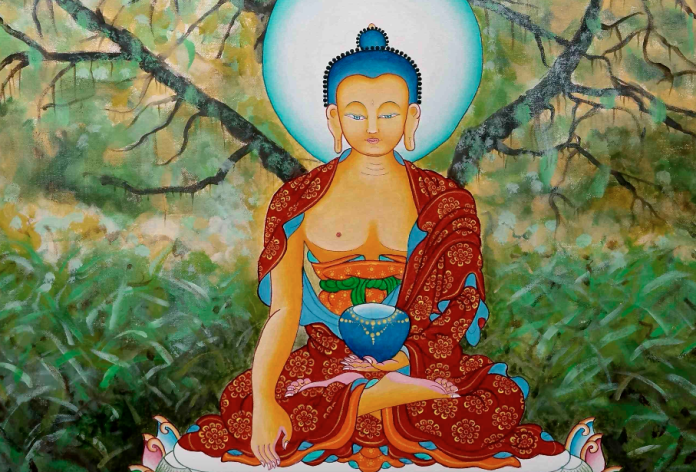 Lone Goat Gallery invites you to the opening of Luka Carstens-Hey’s exhibition Visions of Buddha Friday May 12th at 6pm.

Luka Carstens-Hey is a local artist creating contemporary sacred art in the Tibetan tradition. Luka is part of a growing generation of contemporary artists articulating their own visions while maintaining the discipline and spirit of Tibetan Buddhist art. For the past seventeen years, Luka has been a student of Karma Phuntsok (father of contemporary Tibetan art) as well as other master artists in Kathmandu, Nepal and San Francisco, including Tshering Sherpa of Rossi and Rossi.

The beauty and richness which graces his work is influenced by his diverse life experiences: from working on restoring medieval frescos in remote Himalayan locations, to the spiritual and sacred landscape of northern NSW and SE QLD and the inspiration of receiving tutelage from master artists from San Francisco, Kathmandu to Kyogle.

Interweaving traditional techniques and symbols with modern inspirations, Luka’s work connects east and west in a new Australian lineage of sacred contemporary Buddhist art. The pervasive presence of Buddha, nature, the belief that all beings are naturally enlightened, is a resounding message in his work.