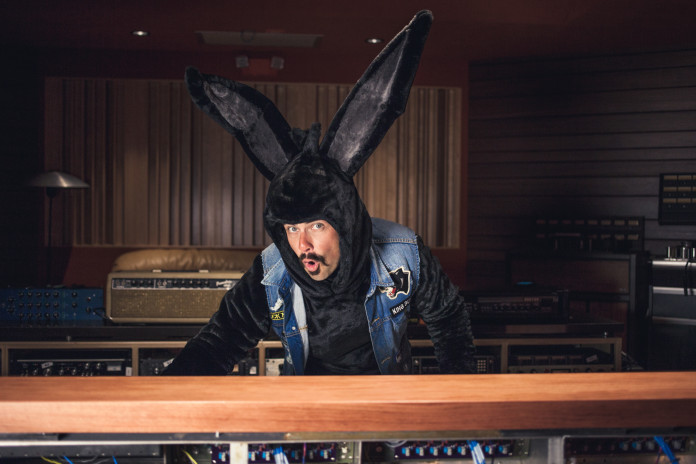 There’s a new rabbit bringing some rock’n’roll to the Australian kid’s entertainment patch. His name is King Bunny and his band is BUNNY RACKET.

Today Bunny Racket officially releases its first single, a bass heavy thumper called ‘A Chicken is not a Fruit’. Check it out…

‘A Chicken is not a Fruit’ is a taste of things to come, including an album and an online music video series that follows the adventures of King Bunny – a guitar wielding, skateboard riding, nature loving rabbit with a passion for playing rock’n’roll… LOUD!

And it doesn’t stop there. Hopping on stage with King Bunny is an all-star, revolving live line-up including members of The Vines, Wolfmother, Skunkhour and Grinspoon. They ruled Little Splendour at this year’s Splendour in the Grass and will soon hit the stage at Aussie kid’s festival Dress Up Attack.

The sound… Imagine the Ramone’s, KISS and AC/DC joining forces with The Cat in The Hat and you get an idea of where Bunny Racket sits on the musical spectrum.

“Rock’n’roll struck me like lightening when I was 12 and went to my first gig, the Ramones. I was struggling to see the band when some older guys, punks, saw me and put me up on their shoulders. The feeling of that experience has stayed with me. Music brings people and generations together.” said Walker.

It’s this idea of shared experience that brought Bunny Racket to life, driven by Walker’s fierce love for rock music and a yearning for kid friendly tunes that are relevant, positive, educational and inspiring. There are lessons to be learned in spelling, counting, colours, geography and of course music.

With ‘A Chicken is not a Fruit’ set to prick up the ears of both young and old, it’s time to bring Bunny Racket to life. Backed by a great crew and an epic soundtrack, Andy Walker and the team are ready to get filming, but they need help to make it happen.

Coinciding with the release of ‘A Chicken is not a Fruit’, a Bunny Racket Kickstarter Campaign launches today and will help fund the production and post-production phases of the first 4 episodes. Each episode will be released free to air via YouTube, and feature two music videos within each story. Please spread the word!