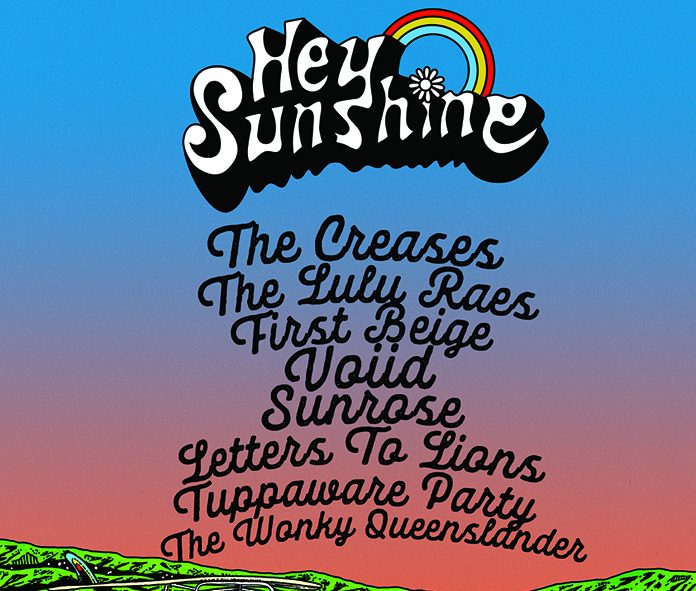 Hitch a ride to Hey Sunshine!

After its much-loved inaugural edition on the Gold Coast in 2017, Hey Sunshine is back this year with another thumping lineup. Moving further south, Hey Sunshine has found a new home in the grounds of the gorgeous hundred-year-old institution that is Billinudgel Hotel, just thirty minutes south of the Gold Coast and ten minutes north of Byron Bay.

Hey Sunshine this year is stoked to be showcasing beloved Brissy lads The Creases as headliner, joined by Sydney band The Lulu Raes who will dazzle with their punk and dance-smothered pop tunes. Also on the bill are entrancing punk princesses Voiid – guaranteed to make your face melt and your boyfriend cry… Local Byron boys Sunrose are all set to present their sunshine-infused psych rock alongside Brisbane’s First Beige with their funky disco, neo-soul ensemble. Also road tripping to Hey Sunshine are captivating live performers Letters to Lions, plus celebrated indie faction Tuppaware Party. In addition, Hey Sunshine patrons will be thrilled again with the return of whacky DJ collective on wheels – The Wonky Queenslander who will pump the dirty beats in between bands with their dynamic electronic and vinyl mixes. In their first ever headlining gig in the Byron Shire, The Creases are itching to thrill with their oh-so-tight live performance, after having a break from performing this year on the back of their acclaimed debut album release Tremolow. The Creases live, are a real treat.

Like 2017, where the event raised money for Gold Coast Youth Service, Hey Sunshine this year is proud to feature another fund-raising initiative; this time raising money for Red Dust. Red Dust is an Indigenous health-promotion organisation working in remote Indigenous communities in the central and northern regions of the Northern Territory. Hey Sunshine organiser Anthea is a registered nurse at the Alice Springs Hospital working between the surgical ward and emergency department, seeing firsthand everyday the health issues of our Indigenous people, who are heavily impacted by the burden of multi-complex chronic diseases. Red Dust are doing amazing work and achieving great outcomes in breaking the cycle of intergenerational chronic disease via their programs for health promotion and improving health literacy in these Indigenous communities; especially for the younger generation in areas such as Tiwi Islands, Daly River and the Central Australian communities of Yuendemu, Kintore and Areyonga. Red Dust also runs programs providing mentoring and positive role models in the cultural areas of sport, art, music and dance. Local Byron resident, Bundjalong and Gumbaynggirr Nations man and professional surfer and artist Otis Hope Carey has donated one of his sought-after paintings which will be raffled off at the event raising money for Red Dust. Hey Sunshine patrons are urged to buy a raffle ticket for the chance to take home an Otis Carey original and help raise funds for this wonderful organisation.

Hey Sunshine 2017 met rave reviews, with many requests for another event this year. Hey Sunshine is excited to present its second edition – for fun and friendship; bringing together an eclectic mix of artists and bands and building upon the already flourishing Northern NSW music scene.

It promises to be a great night so come shake a leg at Hey Sunshine!

Tickets available now from Oztix via the Hey Sunshine website.