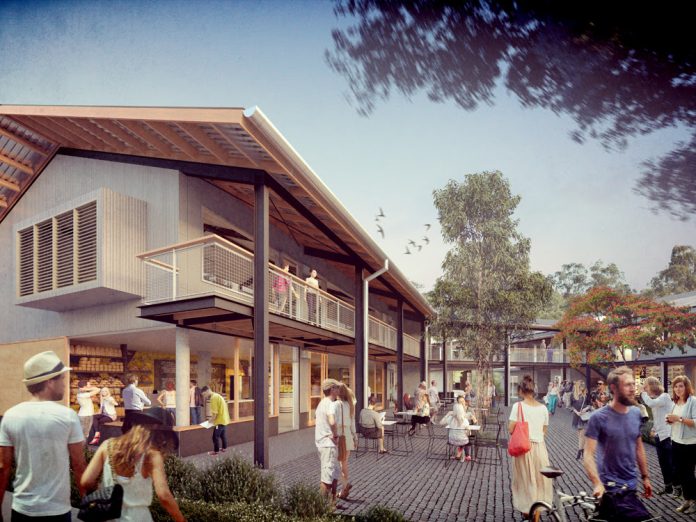 Habitat Byron Bay launches with the opening of new restaurant
Barrio Eatery and Bar and a collection of Byron Bays most creative lifestyle businesses including; St Agni, Zulu and Zephyr, Pampa, The Bare Road, Byron Bay Hanging Chairs, Tigmi Trading and Our Corner Store under the umbrella of Habitat Home & Habitat Women.

Created as a hub for like-minded people and businesses to come together, Habitat Byron Bay has been specifically designed as a space for people to live and work in a socially and environmentally progressive environment.

Conceived by Byron Bay local Brandon Saul, the idea behind Habitat is to create a modern village lifestyle by building a variety of different commercial and housing options to suit passion-based businesses who value a sense of community.

Brandon explains; “People are striving to achieve a good work/life balance. Habitat is simply a reflection of this trend which is in keeping with the Byron lifestyle. It’s also for those amongst us that want to lead a more sustainable, balanced lifestyle – without having to compromise on creature comforts or style.”

In keeping with this ethos, Habitat has curated some of Byron Bays best design led brands across, furniture, homewares and fashion in a series of collective pop-up retail spaces to launch the precinct. Two collective pop-up retailers, Habitat Home and Habitat Woman, will run throughout the summer and features over 40 local brands across the two stores, including Zulu and Zephyr, St Agni, The Bare Road, Annukka, Saint Helena, Tigmi Trading, Pampa, Byron Bay Hanging Chairs, The Dharma Door and Our Corner Store, along with handcrafted furniture and wares by the likes of Martin Johnston and JD Lee and many more. In a move to give back to the local community, 10% of every sale at Habitat Home and Habitat Woman over Christmas will be donated to the Byron Community Showers initiative for local homeless and vulnerable community members.

Operating alongside Habitat Woman and Habitat Home, is The Department of Simple Things, run by David Fraser, owner of Mr Simple, who offer a range of menswear and lifestyle goods as well as an in-house barber, Byron Bay Barber Co.

A pop-up concept store by cult denim label One Teaspoon will also be included in the mix, along with a mid-century furniture showroom by Case 22 Byron Bay.

The much-anticipated Barrio Eatery and Bar will kick off trade December 21, providing a range of offerings including a restaurant with a large charcoal grill section, bar, St Ali coffee and wholesome salads and takeaway food options.

Barrio, meaning neighbourhood in Spanish, is a partnership between Tristan and Kassia Grier who co-own Harvest, Dan Wyllie – a highly experienced bar and restaurant manager, and Argentinean born Chef, Francisco Smoje and wife Emma Byrne, who have developed a cult following at their pop-up communal dinners known as ‘Francisco’s Table’ around the Byron Hinterland.

“Francisco’s food is uncomplicated and uncompromising, which teamed with Dan’s hospitality, is a perfect fit,” says Tristan.

“We want to create a real community feel at Barrio that the developers have already established at Habitat where it is an inspiring place to share ideas, network and relax,” he adds.

With the new solar powered train expected to be in operation before Christmas, there will be a direct link between North Beach and Byron town providing a direct access to the prescient for visitors.

“There’s already a great energy around the place with businesses like F45, Bende Pilates, DFJ Architects and Cumulus VFX based here – I’m looking forward to seeing what this summer brings with the pop-up retailers and restaurant opening and the first round of Habitat home owners moving in.” says Brandon.

He adds, “I may be biased, but I think Byron is one of the few regional locations in this country from which you could easily base an international business. There is the idea of dropping in and out – you can surf at lunch and run a serious business in the afternoon. Cheap air travel and good internet is enabling people to make the change – to live the dream”.

Now who doesn’t want that?

Habitat will include a second stage of residential/commercial housing, to be released on the market in early 2018.