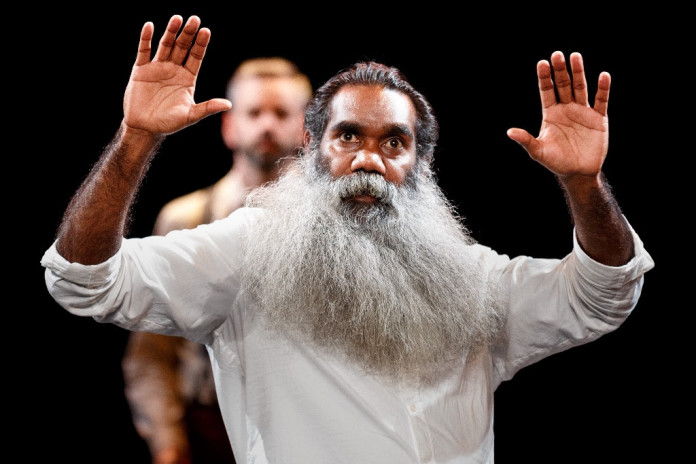 In the neglected storehouse of Australian history sits this definitive story. At a Victorian Parliamentary Inquiry in 1881, the men and women of the Coranderrk Aboriginal Reserve went head-to-head with the Aboriginal Protection Board. Their goal was both simple and revolutionary – to be allowed to continue the brilliant, self-sustaining farming community they had established on the scrap of country left to them.

Coranderrk, which premiered to critical acclaim at Belvoir in 2013 and a sell-out season, returns re-written and remounted for a national tour presented by ILBIJERRI Theatre Company and Belvoir with Regional Arts Victoria.

This incarnation of Coranderrk stars one of Australia’s most recognisable faces of theatre, film and TV, Trevor Jamieson in the lead role, alongside Matthew Cooper, Ebony McGuire and Jesse Butler.

The production, which is inspired by transcripts of the 1881 Inquiry, revives the voices of all those, black and white, who fought for a better compact between the country’s oldest and newest inhabitants – three dozen of them from 136 years ago, speaking for themselves, directly to us, as though the question at hand remains unanswered today.

The Coranderrk station was established 154 years ago in 1863 by surviving members of Kulin clans who had been displaced from their lands by the advancement of European colonisation. They settled outside of present-day Healesville, Victoria and established a thriving farming community. As white farmers began to settle in the area they lobbied to have the people of Coranderrk removed from the valuable farming land they were cultivating.

Faced with the prospect of being dispossessed of their land again, the men and women of Coranderrk mounted an unprecedented campaign. They wrote letters to Melbourne’s newspapers, petitions to Ministers, and formed deputations to the Chief Minister by walking into Melbourne, appropriating the power of the written word and white political discourse to demand justice, dignity and self-determination. A Parliamentary Inquiry was appointed in 1881 to investigate the management of Coranderrk and decide upon the future of the station and its inhabitants.

This special production pays tribute to the resilience and adaptability of a people who rose to the challenge despite the odds, appropriating the power of the written word to make their own voices ring loud and clear.

“It is an honour that ILBIJERRI asked me to direct this story of such an amazing historical event,” said Director Eva Grace Mullaley “The ancestors given voice in this play were astute and resilient First Peoples in a very prejudiced and harsh era. You can’t know the story of Coranderrk without feeling a gamut of emotions. The cast, crew and I revel in the importance of this story being told right now, when it is so needed. It is an honour to be revealing the real history of Australia, in an indisputable verbatim play, with an honest and poignant story of perseverance and pride.”

A collaboration between leading Indigenous and non-Indigenous artists, researchers, education experts and community members, Coranderrk aims to encourage a shared understanding of the past between Aboriginal and non-Aboriginal people.