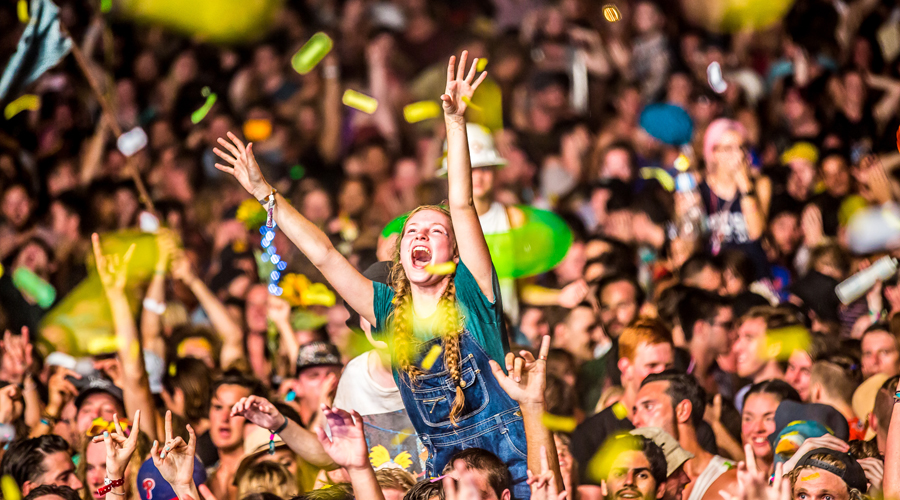 Now is the time to get ready for General Ticket Sales, which start tomorrow morning Wednesday 26th August at 9am AEST for the stunning coastal towns of Lorne, Marion Bay and Byron with all ticket types available. Head to www.fallsfestival.com.au for all the details. Joining team Falls this year will be:

Deriving her name from the phonetic combination of the words ‘soul’ and ‘folk’ (which she herself describes as odd considering the fact that her music isn’t really either) SOAK is the pseudonym of 18 year-old Irish prodigy Bridie Monds-Watson. Armed with a precious voice and a gift for songwriting as miraculous as it is majestic, her sound would be placed on the same shelf as the likes of Björk and Cat Power. Her debut album Before We Forgot How To Dream was released in May this year to breathless reviews following an unprecedented level of hype arising from her recent performances at SXSW. Tunes like ‘Sea Creatures’ and ‘Blud’ have become ubiquitous as SOAK converts one devotee after another.

2015’s breakthrough artist JARRYD JAMES has been busy charming the country with his double-platinum hit single ‘Do You Remember’ from his forthcoming debut LP due out this September. The 12-track album will feature collaborations with talented producers like Joel Little (Lorde, Broods, Sam Smith), Malay (who was at the helm for Frank Ocean’s superb Channel Orange), Pip Norman and Matt Corby. Warm hearted and easy going, his second single ‘Give Me Something’ has already reached #1 airplay on triple j with its soul-tinged tones. Failing to stop there, his new collaboration with Julia Stone formed the lush track ‘Regardless’.

Swedish singer and rapper ELLIPHANT is a galvanising SWAT-led assault of MIA-grade political gyration and avant-garde dance. The reggae-pop maverick’s Look Like You Love It EP featured the likes of Diplo, Skrillex, TV On The Radio’s Dave Sitek and more. Her second EP is a musical patchwork that’s as warm as it is wild. The intoxicating, yet intricate title track ‘One More’ got a lot of Summer love from triple j and features fellow Scandinavian native MØ. It’s no surprise that as soon Elliphant unveiled the single, it became the “#1 Most Tweeted Song on Twitter”. With a new album due out this September, Elliphant is coming back to Australia after her sold-out run of Splendour sideshows. She’s equal parts crazy club girl, hip-hop gangster, R&B baller and hippie spirit and she’s going to bring some seriously cool vibes to Falls.

COMEDY!
Some of the sharpest tools in the Aussie comedy shed are ready to take on the Falls Comedy stage! We’re excited to announce some of the finest touring funny guys and gals, including:

As the star and creator of the critically acclaimed show Legally Brown, NAZEEM HUSSAIN is one of a rising breed of comedians not afraid to embrace and lampoon their unique cultural heritage. Of Sri- Lankan-Tamil descent, Nazeem first gained notoriety as one half of the wildly successful comedy duo Fear of a Brown Planet, along with his partner in crime Aamer Rahman. FOABP sold out comedy shows around the country, he became a regular on triple j and received rave reviews at the Edinburgh Fringe Festival. Since then Nazeem has become one of the most sought after young comedians in Australia through his work on Comedy Centrals Balls Of Steel, The Project and Q&A. He even supported Dave Chappelle on his recent tour!

Everyone’s favourite felt faced comedian, RANDY has been popping up everywhere of late. Carving out his purple, felty niche on the world comedy stage has been no small mean feat for a bloke with such obvious mobilisation difficulties, but against all odds Randy has thrived. His debut solo show received critical acclaim, selling out seasons from Melbourne to Edinburgh and earning him a nomination for the Golden Gibbo at the 2009 Melbourne International Comedy Festival. In 2010 Randy joined forces with good mate Sammy J to create Ricketts Lane a live sitcom that has proved to be wildly popular with their legions of fans. All this, and he still finds time to play squash every Thursday evening in Moorabbin.

ADAM ROZENBACHS is one of those blokes. You’ll know his face, you’ll know his voice, you’ll know his off-key sense of humour once described as “Jerry Seinfeld with a black heart” but will you ever know the real Rozenbach? Probably not. No matter though because when someone is this quick on his feet, there’s no need for intimacy. Clocking up eight successful Melbourne International Comedy Festival shows (including several sold out seasons) and appearances on shows such as Spicks and Specks and The National, Adam is a man about town. He’s also an accomplished writer, turning his hand to sport for Before The Game, opinion for The Herald Sun and men’s fitness for uhh… Men’s Fitness magazine.

Described by the Daily Telegraph as a “man destined for big things” and also “hilariously inappropriate” by Beat Magazine, NICK CODY is more than just a man with two first names. In fact, at only 28 years of age, it could be said that Cody has managed to fit two blokes worth of careers into his rapid ascent. Making his name on the Melbourne International Comedy Festival Circuit by selling out six years worth of shows (culminating in 2015’s Beard Game Strong) Cody has gone on to headline shows in Australia, Montreal and New York City and has shared the stage with such international superstars as Jim Jefferies, Anthony Jeselnik and Bill Burr – who personally selected him as the support for his Sydney Opera House show.

Brisbanite turned Sydneysider BECKY LUCAS is an up and coming darling of the Australian Comedy scene. Downbeat and composed, her unassuming stage presence and mild manner seem designed to lull you into a false sense of complacency. Her style is the comedy equivalent of putting a silencer on a gun; you don’t hear the pearlers coming, you only know when they hit.

As laid back as comedians come, TIEN TRAN has established himself as a shining beacon on a packed landscape. His first Melbourne International Comedy Festival show If You Don’t Know, Now You Know exhibited a knack for quick wit and ability to hold up a mirror to his audience. Tran touches on Australia’s skewed relationship with race but never lets things get too heavy. Being born here, Australians don’t consider him an Australian and the Vietnamese don’t really consider him as Vietnamese either. This allows Tien to bring a unique outsider’s perspective to his comedy. He’s more than happy to riff on sex, housemates, family and anything else his razor sharp mind comes across.