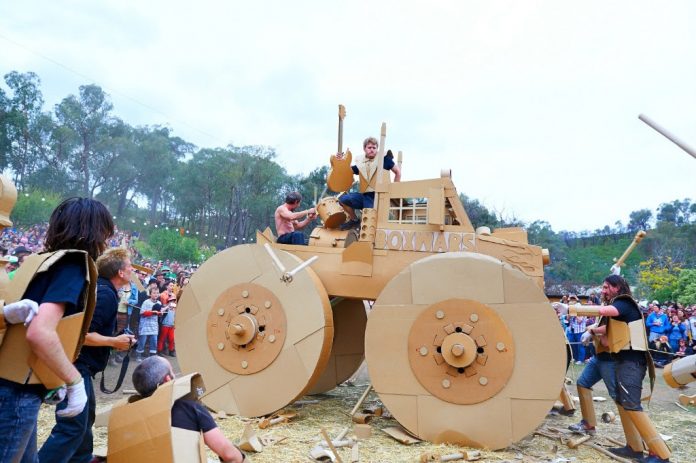 A giant roaming woolly mammoth, a replica Stonehenge made out of cardboard, an epic staged cardboard battle with cavemen and sabre-toothed tigers, hot box rock and roll yoga, homegrown comedy and a Howl & Moan Records stage showcasing local musicians. This is just a glimpse of what will be on offer at Falls Byron arts and culture precinct this year. The brainchild of local artist and curator Amac (aka Andrew McDonald), ‘La Henge’ at Falls Byron is an exciting, eclectic mix of home-grown northern rivers punk, workshops, art installations and performances.

A Byron Bay local, Amac has staged over 150 projects and exhibitions with more than 500 artists across the country as the curator and director of Citylights Projects, focusing on collaborative street art and public art. Since 2016 he has also been gallerist of contemporary community art space Lone Goat Gallery in Byron Bay.

“I’m thrilled to be curating this space for Falls Byron and giving festival goers the opportunity to engage in fun, creative, collective activities. The Northern Rivers is home to a thriving underground band and visual art scene and La Henge will showcase some incredible talent, both national and local artists,” says curator Amac.

“As a curator I’m looking to create the opportunity for moments of delight, surprise, serendipity and the thrill of discovery. If you want to learn some wild new dance moves and bust them out as a flash mob, we’ve got a workshop for that. Fancy doing yoga set to heavy rock amongst a cardboard Stonehenge backdrop? We can do it! Masquerade balls, midnight secret block parties, mask and outfit making workshops, outdoor galleries are all set to roll.”

Read on for ‘La Henge’ highlights at Falls Byron …

BOXWARS
Daily workshops, masquerade party and an epic cardboard battle! Melbourne based collective Boxwars have been bringing fun, hilarity and a lot of recycled cardboard to events since 2003. Utilizing the incredible engineering properties of cardboard, they design and construct huge scale set pieces and costumes using only recycled cardboard, tape and glue. They then get together to destroy their creations in a 20-minute staged battle.

“One of our main goals is to bring cardboard back to the consumers who discarded it in the first place without realising its true potential. This we consider a war. After all, the only good reason for a war is a Boxwar!”

Be prepared for a battle of epic proportions featuring cardboard cavemen, sabre tooth tigers and a giant woolly mammoth.

For the first time, Howl & Moan Records will curate their own stage featuring exclusively the cream of locally grown emerging punk and alternative rock bands. PROPHETS
Daily workshops and roaming performances. Prophets are a collective from the Stylefree Planet with outposts in Melbourne and Sydney. They have been sharing their Stylefree art and culture since 2007 and they’re universally renowned for their spirited music made with multiple saxophones, percussion, and original instruments.

BRING A PLATE
Daily workshops and roaming performances. Bring A Plate are an inclusive dance company based on coming together, sharing, diversity and party vibes. Founded in 2017 by Zoe Mitchell and Erika Goldsmith, this dynamic duo have a background in dance, community development and facilitation. They started Bring A Plate to challenge Australian society’s perception of who can dance, how to dance and where to dance. BAP are based in Brisbane and run weekly casual outdoor dance classes as well as a performance crew called “The People” who specialise in flashmobs and party starting.

HOT BOX ROCK & ROLL YOGA
Yoga with Rock music playing at Stonehenge in the morning – what a way to end and start the year.

Get thinking out the box when it comes to your Falls experience this year! Tickets to Falls Music & Arts Festival Byron on sale now fallsfestival.com