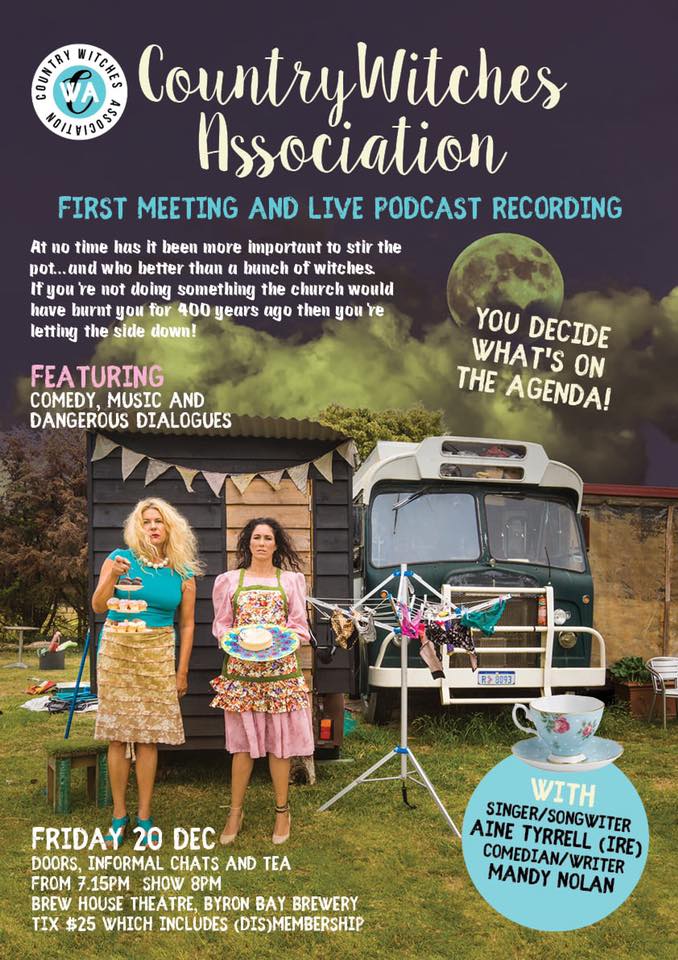 Welcome to the inaugural first meeting of the CWA!

The (dis)organisation everyone’s been waiting for! The Country Witches Association!

Tired of waiting for change, creative women around the world are getting ready to stir the political pot –  bringing comedy and music to the boil, to facilitate  dangerous dialogues and uncomfortable collaborations!

Irish troubadour and Country witch founding member Áine Tyrrell says: ‘If you’re not doing something the church would have burnt you for 400 years ago then you’re just not witching properly…or enough…or at all!’

Comedian and co-founder Mandy Nolan believes its time for a movement for busy women who love tea but can’t be bothered baking cakes.

‘As performers we get a bit tired of sticking to the rules, so the idea of the CWA is to unleash our more deviant selves. This is a creative space to navigate topics at a deeper level than you’d do in a traditional pub format. Everyone in the entertainment industry has to play it safe but we don’t want to. Playing it safe is boring. And it just won’t bring change. We really want to stir the pot on stage and in the audience.’

The CWA First Meeting format invites the audience to participate by becoming members and suggesting topics to be discussed on the Agenda by Mandy and Áine. This will be one of the show’s highlights as it has an unscripted improvised format decided by the audience. The content will form the basis of the CWA podcast to be recorded as part of this innovative live show.

The CWA First Meeting will feature half an hour of comedy and story telling by Mandy who is looking forward to using the new format to bring across some of her more thought provoking ideas and commentary that will be more akin to her regular Soapbox that she publishes in the Echo..except spoken word than her usual stand up.

Traditional music sets don’t allow you to go deeper into the story behind the song. One of Áine’s strengths is her fierce story telling. In her CWA performance she’ll be sharing stories of place, people and politics along with the music.

Multi-talented Mandy Nolan is an accomplished comedian, artist, journalist, scriptwriter and memoirist.  A stand up comedian for well over 28 years, audiences adore Mandy on stage, and around Byron Bay where she lives, Mandy-jokes are as much a part of the vernacular as any surf speak.

Her humour is sharp, honest, sometimes self-depreciating, somewhat outrageous, but never cruel or pretentious. Frequently irreverent, it speaks to a diverse audience with no set demographic, no gender, race or religion, occupation or tribe.

She is a columnist for the Byron Shire Echo, and writes regularly for Mamamia – where she’s also a featured podcast host The Split which just won an award for best Native Post in Berlin.  Mandy has written four books, is demand on the national circuit and tours nationally with her comedy show Women Like Us with colleague Ellen Briggs. Australia’s favourite adopted Irish sister, Áine Tyrrell is a modern day Pirate Queen, except instead of ships, she captures audiences, one heart at a time. Her latest offering Return to the Sea was written and recorded in her homeland but mastered and crowdfunded with one boot in the red dirt of Australia. The album is alive with contemporary narratives rising from a solid respect for tradition. Critics worldwide lauding Tyrrell as a force of nature and this album full of  anthems for humanity. Return To The Sea is a call to arms, a sirens wisdoms and warnings, and most importantly the soundtrack of a woman who walks her own beat. With Áine Tyrrell and Mandy Nolan