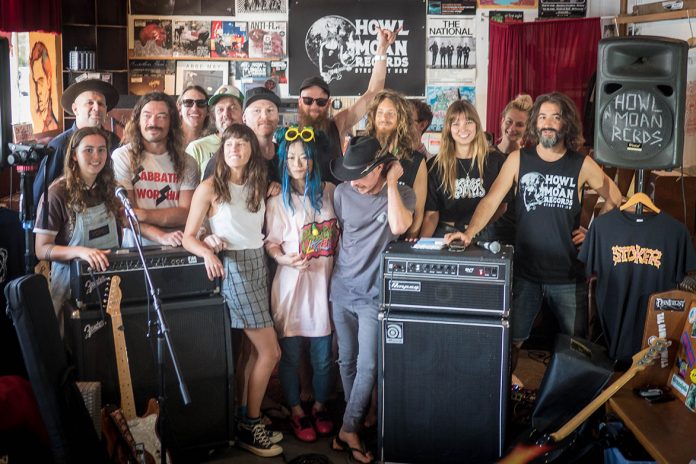 Howl & Moan Records is a Byron Bay institution for musicians and record lovers alike. For the past few years, owner Mario Salvatore Fraietta has fostered the grassroots Northern Rivers band scene, supporting emerging artists across a wide variety of genres, creating a thriving hub around the record store.

At Falls Byron this year, ten local bands will reach an even larger national audience with Fraietta curating a dedicated Howl & Moan stage that will run throughout the festival. The Howl & Moan Records stage will feature the sounds of Byron Bay & the Northern Rivers today, bands performing will vary from Psychedelic rock & grunge to Extreme Metal, Hardcore Punk and experimental noise.

“Howl & Moan Records is honoured to have been granted the opportunity to curate a stage at a prominent national music festival and it is super exciting to invite those bands that have made our regular Tuesday night sessions a success!” said Mario Fraietta.

Launched in March 2017, Howl & Moan Records has always set out to create a space that is more ‘community’ than just a retail music store. Owner/Director Mario Fraietta had purchased the original store known as “Good Dog Records’ and immediately set about changing the look and feel of the store to part café/bar, part live music venue, or a vinyl collectors dream lounge room! You could be mistaken in thinking you were in a back laneway in Melbourne or Berlin or San Francisco rather than on a Byron Bay side street!

Influenced by the very same bars/cafes/record stores/live music venues that Mario had visited while travelling Australia & the much of the world over the course of his 20’s & 30’s, he always saw the connection with the local community and musicians as a key ingredient to long term survival. Within the first few days of operating, Howl & Moan Records hosted their first in a long series of live shows that has seen the small little record store host well over 100 bands and performers, giving many local bands their ‘first ever’ live performance but also travelling overseas acts including bands from the US, UK, Finland, Denmark, Italy & Germany.

Bands not only receive the opportunity to perform to an enthusiastic and supportive local crowd but also have their music and merchandise available for sale in the store on a regular basis, some of the best-selling albums sold by Howl & Moan Records have been by artists who are local and have performed in the store! The Tuesday night ‘Wolf’s Den’ sessions have built up over time to becoming in high demand in musical circles nationwide with opportunities to perform in the store usually occurring on a 3-month waiting list.

YOUR CHOICE:
Falls Festival is a proud partner and supporter of Your Choice, working to create a safer and more enjoyable live gathering environment for everyone.