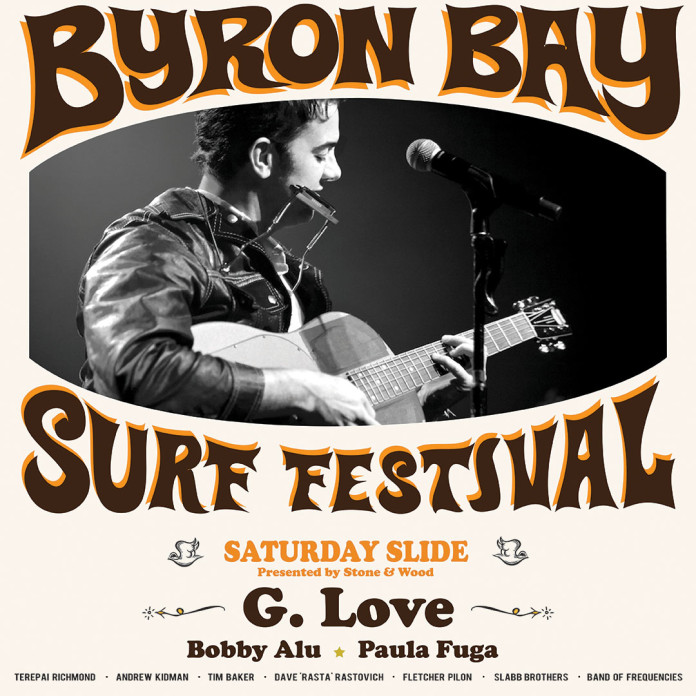 Byron Bay Surf Festival punters are in for a real treat on the Saturday night Feb 25 at the Beachy (aka Beach Hotel) when the iconic venue will be turned into a huge decked out dance party!

Get your tickets NOW so you don’t miss out on this incredible night of music, surf films, and the official launch of Stone & Wood’ signature festival batch beer made from Pacific sea salt and Byron Shire finger limes.

The headline act will be G.Love, playing his only Australian concert for 2017.
His, “sloppy”, and “laid back” blues sound also encompasses classic R&B. His influences range from Bob Marley to De La Soul, the Beastie Boys and even Bob Dylan. There’s no doubt his unique blend of Hip hop inspired blues has carved out a place of his own in the music scene.

Writing and playing music may be his first love, but after that surfing rates pretty highly with G.Love. “When I’m not playing music and not working, and I don’t have any responsibilities, the thing I always want to do is go on a surf trip.” For anyone in town this weekend , please make sure to welcome G when you see him in the waves – he’ll be there!

Also featuring on the Saturday night will be Bobby Alu, the charismatic yet cruisy travelling music man. Having made a name for himself drumming and playing with world class greats such as Xavier Rudd and appearing at all the great festivals from Blues Fest and Woodford, he has honed his Island vibe sounds with baritone ukulele, pacific beats and powerful drumming to create his signature smooth hammock music.

Paula’s love of cultural music has seen her, armed with her trusty ukulele, perform 3 times for US presidents, record with the likes of Ziggy Marley, Jack Johnson, Nahko Bear, Trevor Hall and Mike Love, spreading the thoughtful and evocative voice of the Hawaiian people across the world. Praised for her originality in song composition and ability to stir the deepest emotions with spellbinding and soulful vocals, Paula Fuga has established herself as one of Hawai’i’s most respected live performers Band of Frequencies are the official house band for the Saturday Slide and they will be joining legendary filmmaker, Jack McCoy, for a never to be repeated musical extravaganza, celebrating 25 years in the movie business.

McCoy will be screening 6 of his most iconic clips on the big screen with live musical scores interpreted by some of his favourite hand picked Byron Bay musicians including Andrew Kidman, Terapai Richmond, Dave Rastovich, Tim Baker and more. The clips he will be bringing with him will be from his cult classics “Bunyip Dreaming” and “The Green Iguana” and the musical interpretations from our surf loving muso’s is shaping up to be one of the “Do Not Miss” moments of the whole festival.

The party kicks off at 7pm and tickets can be booked here via the website www.byronbaysurffestival.com.au