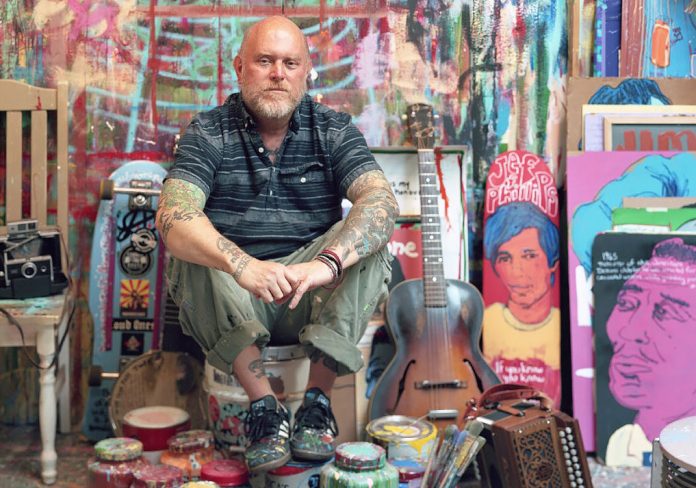 OTIS CAREY
Gumbaynggirr – Bundjalung man Otis Carey is equally renowned for his unorthodox approach to high performance surfing as he is for visual art.

Otis infuses his own traditional indigenous culture with contemporary Australian surf. “I paint contemporary indigenous art,” Otis says. “The way I can best explain it is, it’s a broken-down form of traditional symbols and stories that aren’t giving all of it away but just enough for people to understand”. TIM KERR
Based in Austin Texas, Tim Kerr became involved musically and artistically with the early stages of the DIY (Do It Yourself) punk/hardcore/self-expression movement in the 1970’s.

The idea that anyone could, and should participate in self-expression is key to Tim’s approach to music and visual art. He was a founding member of influential bands The Big Boys, Poison 13, Bad Mutha Goose, Lord High Fixers and Monkeywrench that have made recordings for record labels Touch & Go, Estrus, Sympathy for The Record Industry, In The Red, Sub Pop, and Kill Rock Stars. Tim has also produced and recorded bands for all the labels above, both in the US and overseas. Journalists and critics have cited these bands as major factors in starting everything from funk-punk, skaterock, grunge, and garage. Like Egon Schiele, Andy Warhol, Roy Lichtenstein, Carl Sagan, David Suzuki and Banksy in a blender, Ozzie fuses graffiti, pop art, autobiography, cosmic psychedelia, eco-polical activism and self-help into an eyeball-searing mix all of his own. Using every media available and painting anything that will stand still long enough, Ozzie’s work has featured on innumerable surfboards, record covers, band flyers, a range of ready-to-wear fashion, and in art exhibitions worldwide. Most recently Ozzie staged a sell-out solo show at Byron Bay’s own Spot of Genius gallery, alongside collaborative murals up and down the East Coast and across the Pacific in Hawaii.