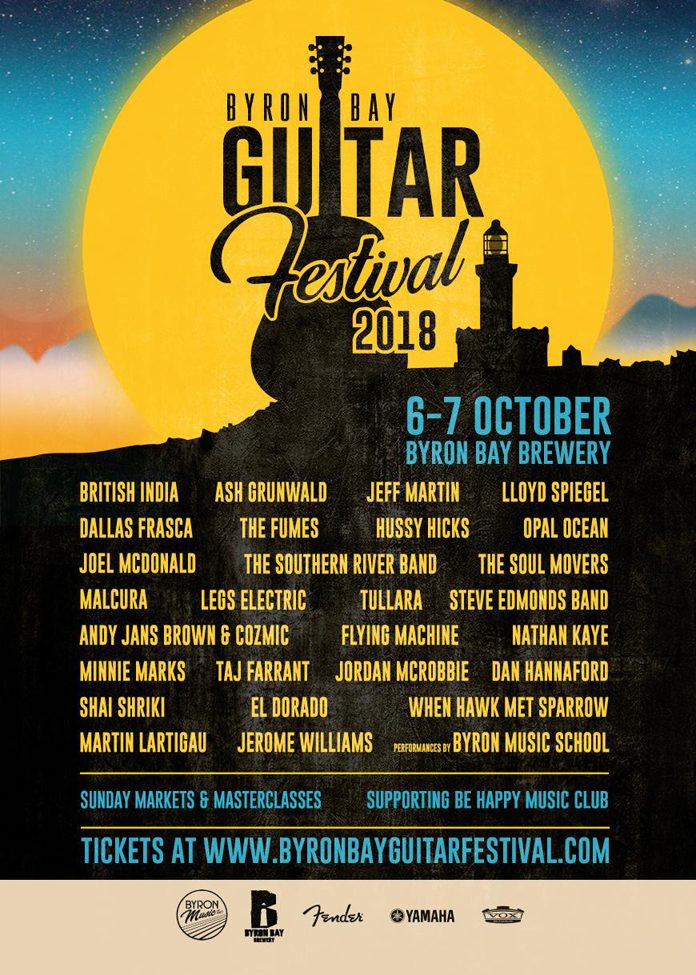 The Byron Bay Guitar Festival (BBGF) is returning on Saturday 6 and Sunday 7 October 2018 at the Byron Bay Brewery for its second year.

The brand new local festival is impressing audience and industry alike with its two-day line up.

Organisers have deliberately put a focus this year on highlighting emerging and local talent, especially our young musicians, and women in music.

Festival Director Nick Sergi says, “Diversity in the workplace is paramount across industries. It is finally being recognised in the mainstream conversation that women deserve their place on and off stage and deserve to be recognised for their talents and hard work. Half our festival crew are women, half our population is female, it’s pretty obvious that we should be working toward a larger representation of our population on stage,”

Nick goes on to say “Looking at history there are not many women celebrated for theirguitar playing. Countless women have been and are brilliant players, but just not recognised for it. Guitar has traditionally been seen as a man’s instrument. If you Google ‘100 Best guitarists of all time’, I think there’s only 2 women on that list, which is ridiculous. If our festival can be a platform, however small, to help shift that perception and change the conversation a bit, then I’m very happy to do that”.

BBGF is proud to present on this year’s line-up, a diverse array of female representation across several genres including Dallas Frasca, Hussy Hicks, Minnie Marks, Legs Electric, Tullara, When Hawk Met Sparrow, and performers from Byron Bay High School (still to be announced). As per last year several Byron Bay High School students will perform throughout the festival, showcasing the many talents our local youth community has to offer.

Nick says, “The future of music and our industry lies in the hands of our young people, so we need to support and nurture their talents and passions to ensure we keep our Australian industry alive, but also so we can continue to benefit as community from real live music”.

This vision is supported by BBGF selecting the Be Happy Music Club as it’s principle charity in 2018.

Founded by local musician Andre Comaru, the NFP raises funds that go toward teaching music to disabled and disadvantaged children in the Pacific Islands, and to use music as a tool for connection and healing.