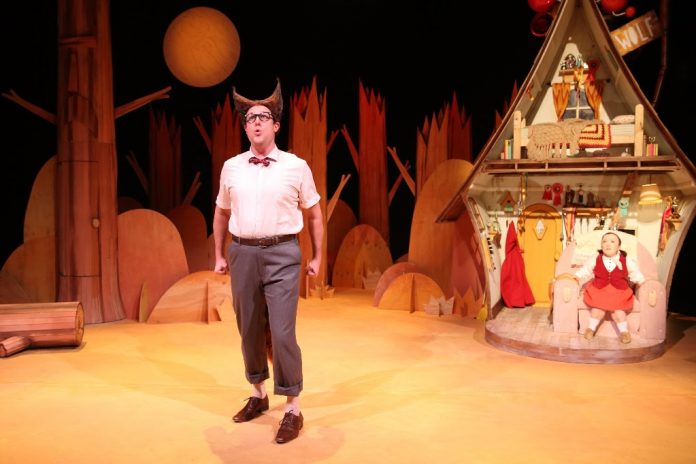 “The best children’s theatre company in the country.” THE AUSTRALIAN

NORPA and The Macadamia Castle present
Big Bad Wolf
A Windmill Theatre Company Production
Thursday 25 Oct, 6pm & Friday 26 Oct, 6pm
NORPA at Lismore City Hall
Tickets: $15-$38
Recommended for children aged 5+ and their families
Bookings: www.norpa.org.au or 1300 066 772
Delicious food provided by The Macadamia Castle will be available prior to both shows from 5pm
***

He’s the most misunderstood character in fairytale history.

Put simply he has no friends. But then he does have incredibly sharp teeth, yellow eyes and his own ideas about personal hygiene, and he is the infamous Big Bad Wolf after all. No one likes him. Luckily one girl is brave enough to double check this wolf’s bad press and an unlikely friendship is born.

This hilarious, table-turning tale will have you wondering why you were so scared in the first place.

“These are the differences that we only really think about when someone else points them out. And when they say “Oh my gosh, the way you walk is so weird, the way you talk is dumb and you’re so tall that you’re scary” … well we all know what happens then. And it’s not easy.”

“Wolfy, our hero in Big Bad Wolf faces this problem every day. He may look scary, but really, he’s just a pacifist poet who loves his teddy bear. He’s all alone without a friend in the world because of how he looks and sounds, and because of what everyone thinks he is: a big bad wolf. And it’s only when he does a good deed to the irrepressible Heidi Hood (distant relative of Little Red Riding Hood) that someone thinks twice and starts to see him for who he really is.”

“For me, one of the great joys in life is words. The notion that you can think an idea, get a pen and write it down on a piece a paper, someone else picks it up and wham! They can see your idea in front of them. That there are words and sounds that can create such wonder and joy. That they can paint a picture, and make you a little scared and fill you with wonder and create new worlds from nothing. But also, sometimes that they are just plain fun. That a simple rhyme can make you laugh! How great is that!”

“Beside the idea of celebrating difference in people, the other thing that is of great importance in Big Bad Wolf is the idea that words can create this kind of joy. That they can build bridges and be used to help people understand you better, but also that they can just be a hoot.” “One of the original functions of the wolf in classic fairy tales is to create a frightening character to keep children out of the forest. Our Executive Producer, Kaye Weeks, had the idea to turn the story on its head and tell an alternative version of events. Our creative team really responded to the idea of the wolf as a misunderstood outsider. Writer Matthew Whittet created the poetry writing vegematarian Wolfy and a story that shows if we are too quick to make presumptions about people, we may be missing out on having some truly excellent friends.”

“Patrick Graham, who always lights up the Windmill stage, embodies Wolfy with such a wonderful nuance he has become one of Windmill’s favourite characters. Meeting him with equal panache, as the high achieving Heidi Hood, is Emma Hawkins. Emma is a hugely accomplished actor and, as a short statured person, her physicality provides a strong, often comic, juxtaposition with Patrick and an extra twist on the central idea of difference. Their onstage relationship is a highlight of this work and the idea of fearing what you don’t know, I think, makes our Big Bad Wolf a thematically pertinent story for our times.”

“From the moment the artists came together to work on this production we had a playful time creating a new fairytale world; one that is joyful, funny and full of quirky characters. For me, friends are one of the best things about being alive and it’s great to remember that new ones can be found in the most unexpected places.”

Windmill was born in 2002 as an initiative of the SA Government to establish a new national theatre company for young people and family audiences with the unique capability to deliver productions commensurate in scale, quality and production values with works created for adults by the larger Australian theatre companies. Windmill quickly established itself as a pioneer of quality theatre for the under-five age group.

In a revolutionary shift from the former commissioning model, the company embarked on its first year of programming under Artistic Director Rosemary Myers in 2009. This presented it with a chance to energetically evolve and develop an in-house style and simultaneously expand its audience to include teenagers and young adults, filling a perceived gap in the market.

Since then the company has gone from strength to strength and has been pivotal in building Australia’s reputation as a world leader in the creation of exceptional theatre for young people.