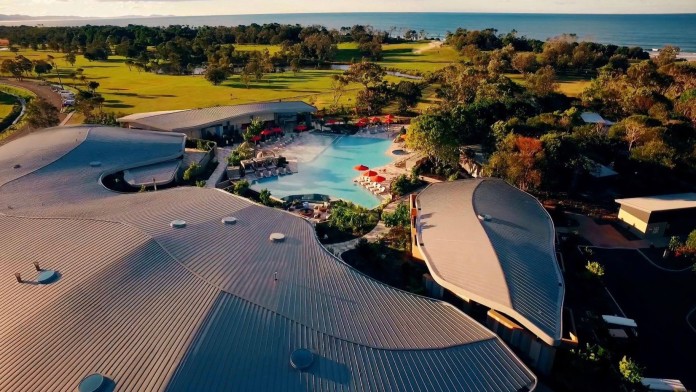 The old and the new collided with tremendous results as Bennett Construction took out the highest accolade in the state at the Master Builders Association Awards last week.

The 78 year old Lismore construction firm won “Best Hospitality Building” at the New South Wales Master Builders Association Awards, beating every high profile project in Sydney and across the state. The award was for the main pavilion buildings at the new Elements of Byron resort in Byron Bay, which opened in February. This is the second project Bennett has undertaken for the owners of Elements of Byron, having previously built The Sun Bistro in Byron Bay. “It’s amazing to have a local builder like Bennett win this award for us” said Elements of Byron owner Peggy Flannery. “It was wonderful that they could recreate my vision and my dream”.

Bennett Managing Director Darryl Piper and Construction Manager Marty Brennan visited Elements of Byron resort yesterday to personally hand the award to Peggy Flannery. “For a Lismore firm to be given the opportunity to build a five star resort in Byron Bay was a major accomplishment for us” outlined Darryl Piper. “To build it in such a short time frame to meet the target opening date was a real challenge and thrill. We are ecstatic and over the moon to win this state award”.

It has been a big month for Elements of Byron. This Master Builders Association Award follows their announcement by Forbes Magazine as being among the 25 Coolest Hotels in the World. And being shortlisted in the 2016 Society of British Interior Design International Design Awards. Peggy Flannery and interior designer Rowena Cornwell head to London next week for the Awards Ceremony. Further, the resort recently won two Awards for Excellence from the Illumination Engineering Society of Australia and New Zealand.

Bennett Construction is currently developing a four-storey business precinct at 214 Molesworth Street Lismore, which Piper says is “the most outstanding commercial development in the Lismore CBD for twenty years”. With a 5 Star NABERS rating and every conceivable environmental consideration such as vertical gardens and solar panels, the high-end development will bring a new level of confidence to doing business in Lismore.