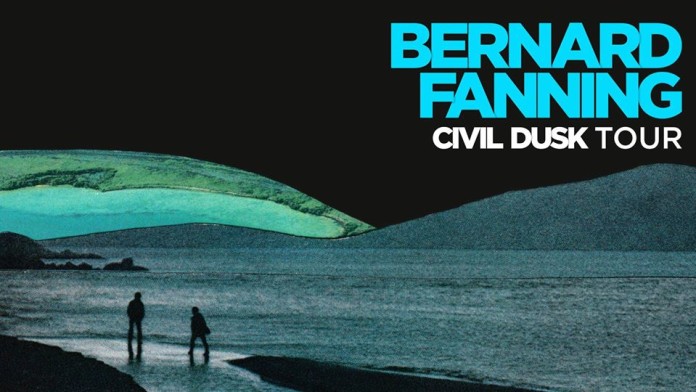 With his solo career now tipping the 10-year mark, Bernard Fanning has firmly cemented his position as one of Australia’s finest songwriters and lyricists. To celebrate the release of his third studio solo LP, ‘Civil Dusk’ Bernard Fanning is excited to announce a national tour that will see him take the stage at some of the most stunning theatre spaces in Australia, including the State Theatre in Sydney, Melbourne’s Palais and The Tivoli in Brisbane. Showcasing new songs from ‘Civil Dusk’ for the first time in a live arena, alongside some old favourites from his extensive song book, spanning twenty-five years.

Bernard will be joined by two of the most exciting local acts in the country right now; haililng from the pristine surrounds of Armidale on the mid north coast of NSW, J Award nominee Dustin Tebbutt has been making waves since the release of his debut EP, ‘The Breach EP’ in 2013. Gathering fans, including UK legend Ricky Gervais, and building up intense aniticpation around his debut album, ‘First Light’ which also drops on August 5th.

On top of being declared Australia’s version of Tina Turner thanks to her soul soaked power crooning, Ainslie Wills has an AMP and Melbourne Music Prize nomination under her belt! Appearing as a guest vocalist on #1 Dads track So Soldier, and support slots with Leon Bridges and Vance Joy to suit, Ainslie will open these shows with a heaving dose of progressive pop.

Civil Dusk is part one of a series of two albums. The second installment Brutal Dawn will follow in early 2017.