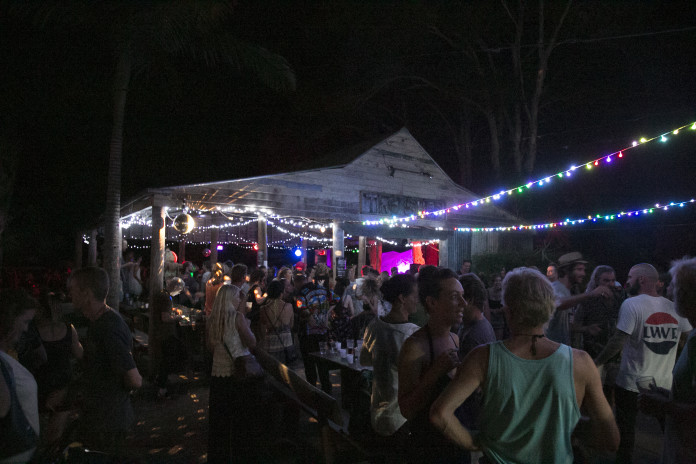 Don’t be a fool and miss April’s Nudge Nudge Wink Wink, raising funds for Kids Caring for Country (KCFC) an after school program funded by the Murwillumbah Communities for Children. The KCFC has been open since 2011 to Indigenous children of all ages and their families to connect with cultural activities and support services in a supportive, safe and child-friendly environment.
For April’s line up bring your dancing shoes for miles of global and local music treats from this eclectic line up including the Cunning Stunts Resident DJ’s Lord Sut and Dale Stephen, locally based national record dealer the Vinyl Junkie, and global-award recognised DJ and Music Producer Miles Cleret of Soundway Records.

Miles is a Northern Rivers based English DJ and music producer as well as the founder of Soundway Records, a world recognised independent label recently nominated for Best Label of 2016 at Gilles Peterson’s Worldwide Awards in London! Over the past twenty years Miles’ varied musical background and voracious habit of finding evermore new sounds and rhythms from around the world has benefited music lovers globally. He’s involved in remixing and editing as one half of Los Hermanos Latinos (with Quantic) and Hide and Smile (With Frankie Francis of Sofrito), as well as playing live at clubs and events around the world such as: the Glastonbury festival, Roskilde festival (Denmark) Turning Point (Toronto), Womadelaide (Aus), and Potatohead (Bali) to name a few. For his Nudge afternoon debut come early, Miles will be playing a super rare all vinyl Boogie and Funk / Disco set from all around the world – taking Nudge to Africa and beyond.

The party with a conscience is a FREE monthly event that brings the community together in an all inclusive way, whilst raising much needed funding for beloved and deserving local charities that help improve the lives of Northern NSW residents. Food trucks, an outside bar and amazing raffle prizes all contribute to this special family friendly event the first Sunday of the month has become.

Fundraising at their events is raised through attendees’ donations, merchandise sales and the selling of raffle tickets. 100% of profits donated to local well deserving charities.

Learn more at www.cunningstunts.com.au, and join the Facebook Event.