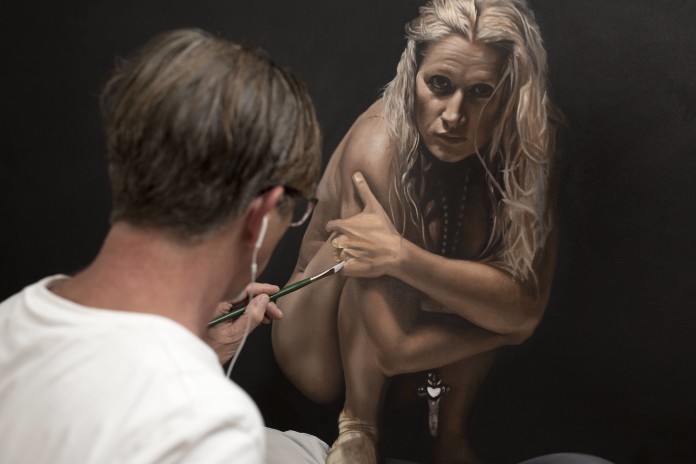 Since the Lennox Head based artist was awarded a Brett Whiteley Scholarship at the Julian Ashton Art School in Sydney twenty years ago he has exhibited across Australia and around the globe, from Europe and the UK, the United States and Japan. He has been a finalist in numerous National Art Prizes including Australia’s biggest portrait competition, the Archibald Prize, where he has been selected as a finalist on four occasions, most recently for his portrait of West Australian singer songwriter Abbe May in 2015.

White Noise is his 30th solo exhibition. “I guess becoming a dad again has brought me home!” mused Angus. “I’ve lived in this area for fifteen years so exhibiting locally is pretty special. Especially at an amazing state museum like the Tweed Regional Gallery. If you placed that gallery, complete with the Margaret Olley Art Centre, in the middle of New York or London it would be constantly busy. It’s a world class facility”.

The term “White Noise” refers to the background noises of our existence. “The noises of the in-between, the noises we never really get a chance to contemplate in busy lives” said McDonald. “The work explores moments of realization and loss. There is an ethereal quality to it. The two large figurative works were based on photographic shoots undertaken in my studio. My partner Beata modelled for Rise. For the other, I set up a single Pieta image carefully configured to approximate Michelangelo’s sculpture in St Peter’s. It’s a classical Christian image but I think of it as something more universal. It deals with loss and a senseless death occasioned by fearful violence and prejudice. This is a lesson we are as yet unable to learn as a race”.

McDonald encourages the local community to attend exhibitions as a way to “jump off the business of surviving for a while”. “To go to another place, to escape to where there is beauty and tranquility” he says. “And the great thing about visiting an exhibition at a gallery like this is that nobody is trying to sell you anything! It’s an opportunity to experience something, like being lost in a good book”.

“I’ve always been a big fan of Angus’ work” shared Director of the Tweed Regional Gallery Susi Muddiman OAM. “He has a genuine talent for capturing the sensuality of the fall of light and shadow on drapery –a Renaissance quality that is superb. He adds dimensionality to flat picture planes and makes the objects in his works appear so real, so accessible. There doesn’t seem to be a starting point or a finishing point of his brushstrokes. I’m so proud to show Angus’ work here”.

White Noise is exhibiting at the Tweed Regional Gallery from 4 March to 1 May. There is a celebratory opening event on Friday March 4 at 6:00pm (for 6:30pm) DST for this and two other exhibitions opening at the same time. One is new work by Byron Bay based artist Rick Shearman and the other, Uncommon Australians, is a major touring exhibition of sixty of the most popular works from the National Portrait Gallery. Visitors will also be able to enjoy the permanent tribute to one of the country’s greatest artists at the Gallery’s splendid Margaret Olley Art Centre.

All are welcome to attend. The Tweed Regional Gallery is open 10:00am – 5:00pm, Wednesday to Sunday. Admission is free.