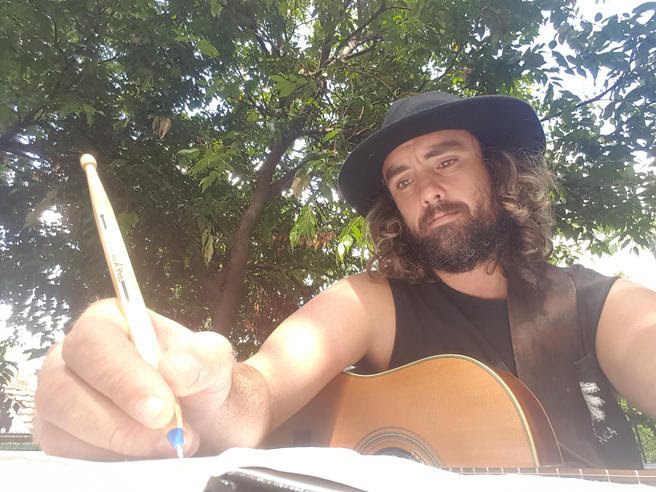 The votes are in and the public has spoken! Falls Music & Arts Festival promoters today announced Tweed Shire singer songwriter Matty Rogers has scored a paid slot on the Falls Byron 2016 line-up via the Foster A Band initiative. Matty will take to the Falls Byron stage in front of a sell out crowd, alongside the likes of Childish Gambino, London Grammar, Grandmaster Flash, The Avalanches and more!

Matty Rogers has been creating and performing his original music throughout Australia for the last 12 years and his unique blend of blues, folk, and rock has seen him perform alongside some of the best in business. His percussive guitar style and high energy foot stomping (Kick and Snare) make for a big sound. His new E.P. ‘Walk to the Water’ (produced by Aria winning Stuart Stuart) is off to a great start with national and international radio stations already jumping on board. In his live shows, Matty is known for being highly entertaining with a soulful, rock out, laugh-out-loud nature and loves to get the crowd rocking – perfect for Falls!

Falls Music & Arts Festival expanded its popular and long-running Foster a Band initiative to include Falls Byron this year, giving Falls fans across Australia the chance to vote for an up-and-coming Northern Rivers act to join the 2016 Byron line-up. Each act was nominated by a local media outlet, helping introduce local talent to the Falls community.

“We had an incredible range of Northern Rivers talent in our first Foster A Band comp and a great response from voters,” said Falls Byron Director Brandon Saul “Congratulations to Matty Rogers and welcome to the line-up! We’d like to thank to all the local acts, media outlets, and the community for getting behind Foster a Band’s first outing in Byron. We look forward to showcasing more local talent and growing the initiative in years to come.”