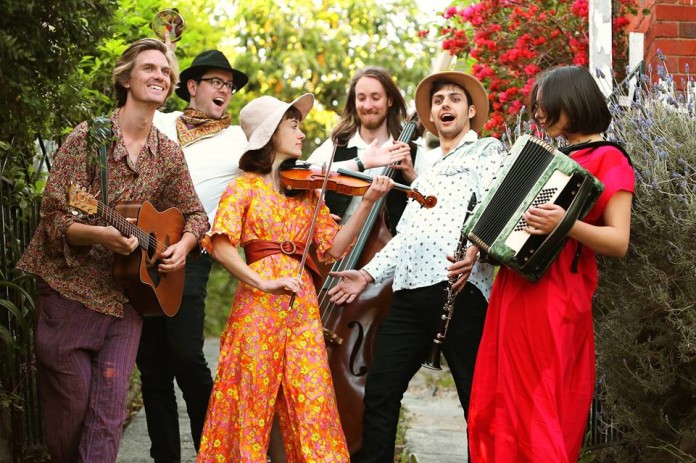 It’s been a quick ascent for Melbourne’s freshest Gypsy band Hello Tut Tut as they’ve gone from playing frosty morning markets and quirky cafes to some of Melbourne’s most iconic venues around town. Although it’s early days, it can be safely said that Hello Tut Tut leave patches of sweat and odours that smack of a good time in their wake.

Over the last six months this juicy 6 piece of gypsy jivers has brought nights to staggering starts and chaotic conclusions, whether it be on the grungy dance floor of Bar Open, under the olive trees at Farouk’s Olive or by the red and white checkered candle-lit tables at Open Studio.

Their enthusiasm for embracing any opportunity to put on a high energy show has seen them gaining a reputation as head turners, jaw droppers and gypsy beat boppers.

In this time Hello Tut Tut have happily taken their music where necessary, playing intimate charity gigs, DIY shows on the back of wagons in the Gipsland bushland, to the main stage of The Village Festival in North Fitzroy.Having gained solid traction, and realising that dreams are a mere stone’s throw away, Hello Tut Tut have buried themselves deep in dam breaking projects and have a killer debut CD ready for a January 21st release at Open Studio in Northcote.

But why wait until then? Their tunes are now up for streaming and online purchase through spotify, apple-music and itunes.On the horizon is the band’s Summer Tour will take them to The Grove at this year’s Byron Bay Falls Arts and Music Festival, with performances twice a day. 2017 will be ushered in with a string of shows through Brisbane, Byron Bay, Newcastle and Canberra, busking along the way, before finally hitting home with a dip into Open Studio before diving into the Carlton Baths for a cool down.

This tour is the time to catch them as they establish themselves in Australian music culture, bringing with them tastes from the Balkans and beyond.