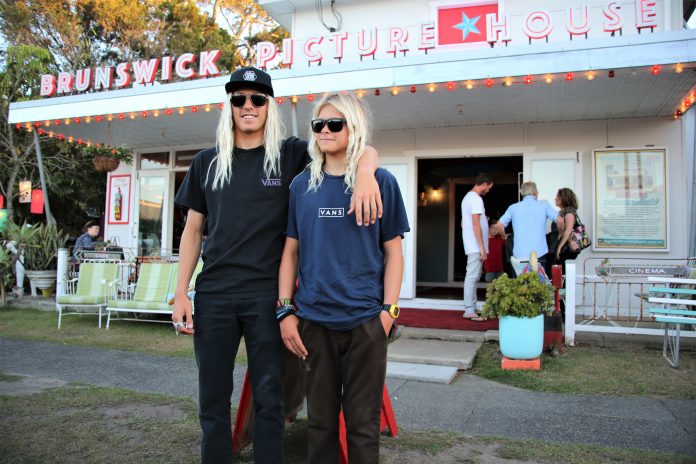 A surprise was in store for the audience at the Australian premiere of The Tony Alva Story at Byron Bay International Film Festival (BBFF), as pro surfer Kyuss King was in town to meet the crowd and give away a Vans goodie bag!

Local man Steve Lamb was chosen by Kyuss to receive the epic goodie bag worth over $500. And Steve, in true Byron Bay spirit, decided to gift the bag to the youngest member of the Brunswick Picture House audience, 6 year old Noah Cunningham! Kyuss, part of the Vans team like Tony, is now on his way to Hawaii, where he will compete in the Vans Triple Crown of Surfing later in the year. A local to Byron, he said “it’s cool to come to my local festival and inspire young kids to follow their dreams and hear Tony’s legendary story.”

Justin King, dad to Kyuss and younger brother Rasmus, said “Tony will be over the moon that people loved the film so much.” Local skaters, including Trent Bonham, came down from the Gold Coast to show their support. The King family “go way back” with the skateboarding legend and are stoked that the Australian audience have now got the chance to see his epic story in the Vans and Six Stair documentary for the first time at Byron Bay Film Festival.

Tony Alva, the modern-day Godfather of skateboarding, ‘turned teenage unrest into unstoppable ambition in the 1970s, collaborating with Vans to create the brand’s first true Off The Wall shoe for skateboarding – a historical feat at the time.’ And The Tony Alva Story is the story behind his rise to success, showing for the first time ever in Australia at Byron Bay Film Festival.