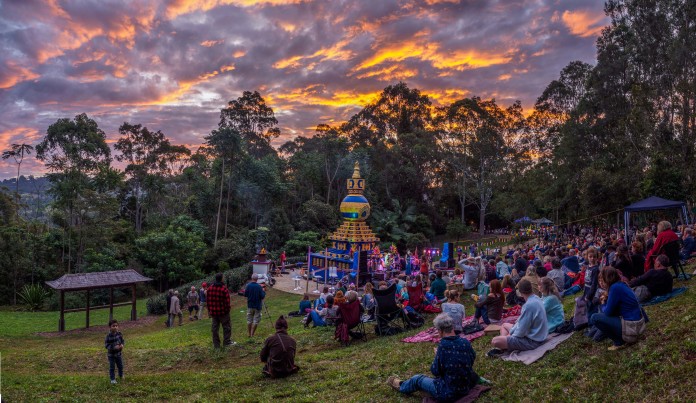 Eighteen months on from the devastating earthquakes in Nepal which claimed nearly 9000 lives and left 3.5 million homeless, efforts to repair the physical and emotional damage continue. Perhaps best known for its smiling Sherpas and mountaineering, Nepal is actually the poorest country in South Asia with one in four young children in the workforce and an average life span of only 54 years. And that was before the 2015 earthquakes.

“The damage to this beautiful country is profound” said Naren King, Managing Dreamer at the Crystal Castle. “Far from being out of the woods, thousands are still homeless, schools are yet to be rebuilt and many remote villages are cut off because roads have not been repaired. We have seen first hand the sadness and despair and are hoping that our wonderful Byron community can help these people who are so in need yet are still, incredibly, smiling. Please come and be a part of our benefit concert on October 29.”

This very special evening around the World Peace Stupa at Crystal Castle (VENUE HAS CHANGED) is set to delight and entertain with its diverse line up of world-class talent headed by Emmy winning singer-songwriter Toni Childs. Her raw and powerful hits such as “Don’t walk away”, “I’ve got to go now”, “Stop your fussin” and her remake of Jimmy Cliff’s classic “Many rivers to cross” have kept her at the top of the global charts since 1988. Also gracing the Stupa Stage are Sacred Earth, Australia’s top selling artists in the ambient music genre whose spellbinding sounds have led to sales of more than a quarter of a million albums.

Join MC Nyck Jeans as he welcomes Grammy nominated Dave Stringer, whose blend of Indian mysticism, groove oriented gospel and Appalachian harmonies have made him a favourite on the global music circuit. And armed with just a microphone, Australia’s beat box extraordinaire Tom Thum will liven things up. One of the most special gifts of the evening is sure to be the performance by Tasmanian Celtic folk group Keystone Angel.

Three days after the concert Naren and Toby King along with Paulo Thiago from Tents to Nepal will return to Nepal, self-funded, to oversee support projects including rebuilding schools, a damaged Buddhist nunnery and Friends of the Himalayan Children. They will also research areas of need as they trek through the Langtang region where two thirds of the community were lost to a giant landslide caused by the earthquakes. “Last year, thanks to the Byron community we raised over $65,000” said Naren King. “With that we built shelters for hundreds, ran a medical camp, a child trauma program, did relief work with the Schechen Monastery monks, delivered hundreds of tents for temporary housing, aid centres and classrooms and supplied hundreds of jackets and quilts to remote villages before winter hit. This year we aim to raise more as there so much work that desperately needs to be done”.

This is an alcohol free event.

Refreshments will be available for purchase.