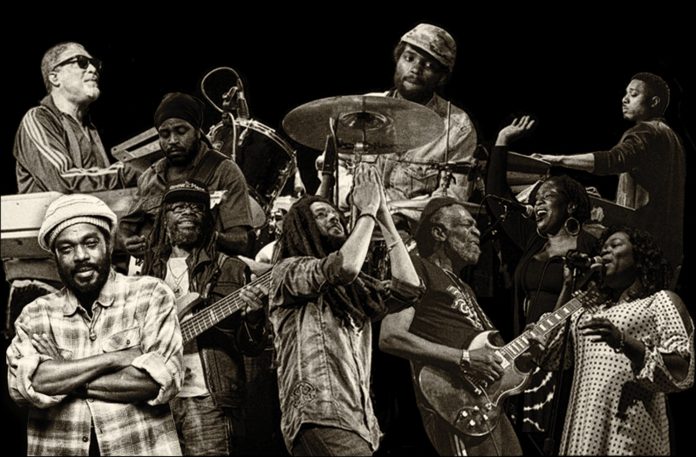 February 6th marks the day the legendary Bob Marley was born 75 years ago, and it is with honour and great respect that on this very day Bluesfest announce the great man’s band The Wailers will perform on Sunday April 12 at Bluesfest, Byron Bay.

Performing songs from Legend, the best-selling reggae album ever, and the second longest charting album ever on the Billboard Chart, 992 weeks, only surpassed by Pink Floyd’s ‘Dark Side of the Moon’ this performance is sure to be a Bluesfest highlight. The Wailers will also perform other Bob Marley classics in what will be a celebration of the music and life of Bob Marley.

“When Bob Marley was on his deathbed, he enshrined The Wailers to make a solemn oath to keep playing his music live for as long as they were physically able. Bob Marley’s Wailers, as they were known have continued to do just that for over 30 years honouring their leader. They continue to do that faithfully to this day, and still have three members in the band, and on stage nightly who were there with Bob, who faithfully direct newer members in the way Bob would have wanted his music to be played. Come experience a night of magic at Bluesfest. To release this news on what would have been this great legend’s 75th birthday is a bit of magic in and of itself and portends a great performance that will become a Bluesfest legendary show for years to come” Festival Director, Peter Noble OAM said on the addition to the 31st edition of Australia’s most awarded music festival.

Peter Noble added, “The incomparable Wailers are coming to Bluesfest this Easter, to rock the stage, to bring the magic and message of Roots Rasta Reggae. It’s a Rastaman Vibration; a slice of music history you must not miss. Legend.

Whilst other bands tour with a member who played with Bob – there is only one Wailers and this is the band who Bob Marley, himself, received the pledge from”.

The legendary Wailers continue their quest to bring reggae to the forefront of the world’s stage. Led The Wailers are true living legends. To see them, to be there in the room with them, is to take a real slice of music history and heritage. For a limited time, The Wailers will be performing classic cuts and huge hits from Bob Marley’s incredible back catalogue. When Bob Marley, the man himself, instructs you to ‘keep The Wailers together’, musicians and music fans alike take note. A stunning line up, featuring genuine reggae royalty and heir to the throne, Aston Barrett Jr (son of the legendary ‘Familyman’), keyboardist Tyrone Downie, and Saxophonist Glen DaCosta, will conjure the spirit of reggae in the way that only they can in a show that is absolutely not to be missed. Josh David Barrett achieves the seemingly impossible by confidently stepping into Bob Marley’s shoes to provide a truly fantastic lead vocal. The essence of 70s rebellion, the true spirit of reggae performed by the people who helped forge the era-defining sound and by those raised under their tutelage. Living Legends, Reggae Royalty carrying the flame – now you can be a part of the legacy. When The Wailers come calling, you listen.

As the only Australian festival to be nominated nine times by the global music industry as Best International Music Festival via the Pollstar Awards, we cannot wait to welcome you to Tyagarah Tea Tree Farm this Easter among like-minded music lovers of all ages, passionate performers, creators, artists, musicians and that unforgettable Byron Bay vibe.

Add The Wailers to the already star-studded lineup of Bluesfest 2020 and we sure are in for a treat this Easter long weekend! For the full lineup so far see bluesfest.com.au/lineup.