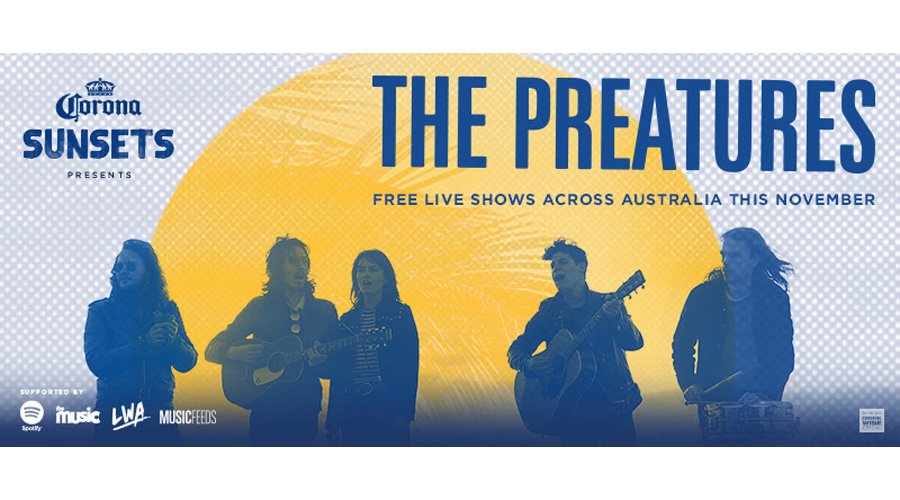 “The Preatures finish the set leaving fans totally sated by their amazing talent yet still begging without shame for more.” The Music

Corona Extra is back and bringing the soundtrack to your summer with another massive free tour!

Hot off their all encompassing ‘Cruel’ national run of dates, The Preatures are hitting the road in acoustic mode for Corona Extra this November; one monumental, free victory lap taking in 20 venues across Australia.

Kicking off in Yallingup, Western Australia on November 6th, The Preatures will then hit some of Corona’s favourite bars across West Australia, NSW and Queensland, before winding up in Victoria on the last weekend in November.

The Preatures captured the ears and hearts of the nation with their 2013 single ‘Is This How You Feel?’ which clocked in at #9 on triple j’s Hottest 100.

The breakthrough track catapulted the five-piece from Sydney’s worst kept secret to festival stages across the globe, from Australia’s own Splendour In The Grass to the likes of Glastonbury, Coachella and Bonnaroo.

With two celebrated EP’s behind them in 2014 they released their much anticipated debut album ‘Blue Planet Eyes’ to critical acclaim at home and abroad.

Already legendary for their high-energy live sets, front woman Izzi Manfredi along with Jack, Gideon, Tom and Luke are getting ready to cartwheel their way across the country for Corona Extra this November, taking you straight to where you’d rather be!