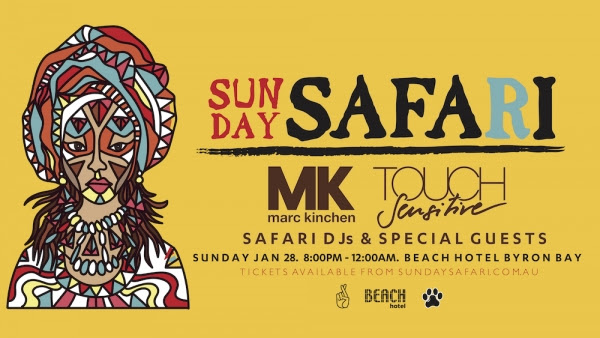 It’s officially 2018 and now that you’ve had some time to dust off the hangovers after our epic Sunday Safari NYE Festival, it’s time to get back into party mode as we say a big g’day to the Australia Day long weekend!

We wanted to start the year with a bang, so put your dancing shoes on and get ready to call in sick. As we present to you the biggest line up ever assembled at the Beach Hotel.

Australian taste maker Touch Sensitive will be slapping the bass, stopping in on his exclusive tour run for his debut album ‘Lay It Down’. Marc Kinchen aka MK is house music royalty and one of the worlds most in demand DJ/producers. Marc is a go to remixer for Lana Del Ray, Disclosure, Diplo and more, with his iconic remixes ‘My Head Is A Jungle’ & ‘See Right Through’ two of the greatest ever made.

As always, make a move or miss out. This isn’t a matter of if it sells out but when. Early bird tickets sold out well in advance of MK being added to line up, it’s also our second last party of summer 17/18 and we would hate to see our favourite locals and regulars miss out on tickets.