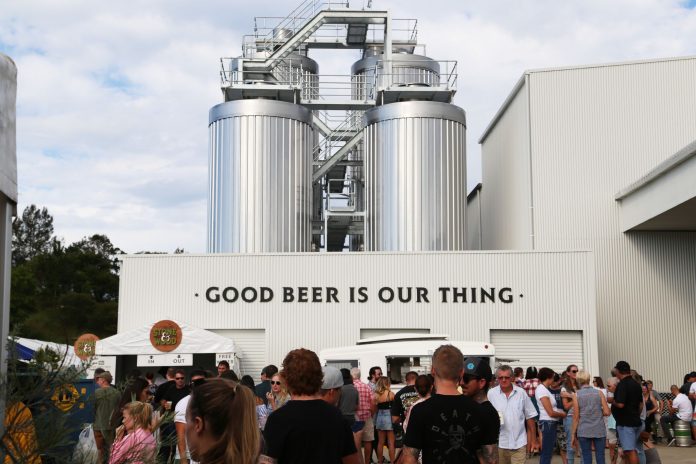 Local independent brewery, Stone & Wood held their annual Open Day at their Murwillumbah site on Saturday 14 April which hosted over 4000 attendees and raised $30,348 for the Wedgetail Retreat Community Hospice and Tweed Palliative Support.

The managing director of Stone & Wood Brewing Co, Ben Summons said, “As the village brewery we are proud of the Open Day’s success in making such a positive impact in our local community, with the money raised and being able to invite Murbah locals inside the gates of their local brewery to enjoy a day with their family and friends.” Stone & Wood donated all proceeds from beer sales that were poured straight from the source to thirsty drinkers. Many of these poured from the latest beer truck come mobile bar – the Pacific Ale coloured, converted Land Cruiser troopy. It was a huge hit with fans. The brewery’s merchandise tent was swamped with locals purchasing wares including the exclusive ‘Swamp beer’ T-Shirt with all proceeds going to Wedgetail Retreat. Drinkers were also more than willing to donate their cup refund from Stone & Wood’s #FORCUPSSAKE cup exchange initiative, that eliminates single use cups from events to the donation tins at the exit gate.

Monies were also raised from the many stalls that were enjoyed by the local community during the Open Day which included, Wedgetail Retreat’s own stand selling homemade goods. Parents generously donated gold coins to the fun activities for their kids to enjoy in Malt Disney. Local food trucks, market stalls housing creatives, artists and agricultural wares and the Open Day’s drink partners including Granite Belt Cider and Bucha of Byron all donated from sales for the day to contribute to the total funds raised.

Meredith from Wedgetail Retreat says on hearing the news of the donation, “When we received the phone call from Stone & Wood to share with us the money raised from the Open day we were all stunned. We love the energy and enthusiasm that Stone and Wood generate in the community and we are so proud to be partnered with them again. As Wedgetail receives no government funding the donation will go towards equipment purchases and operational expenses including our nurse’s wages. We are so grateful for their wonderful support – thank you.”

Other highlights from the day include Stone & Wood’s ‘Murbah Swamp Beer’ which is brewed exclusively for the Open Day as a tribute, which pays homage to a legendary local tale of a truck carrying pallets of beer, that ran off the Pacific Highway in 2001 where locals dived in to salvage what they could so that the beer wouldn’t go to waste! The Brewery Tours ran non-stop all day with guests getting a sneak peek into how the brewery runs and hearing the Stone & Wood story. A special guest from Grinspoon kept the crowds dancing while the sun set over the backdrop of Wollumbin.

“Cheers to everyone for coming and being a part of the success of the Open Day” says Ben.

For those that missed out, Swamp Beer will be back next year when Murwillumbah will open its brewery doors again with the brewery’s separate not for profit entity the ‘Ingrained Foundation’ being the beneficiary of the funds raised from the Open Day to which they will allocate to local not for profit partners.