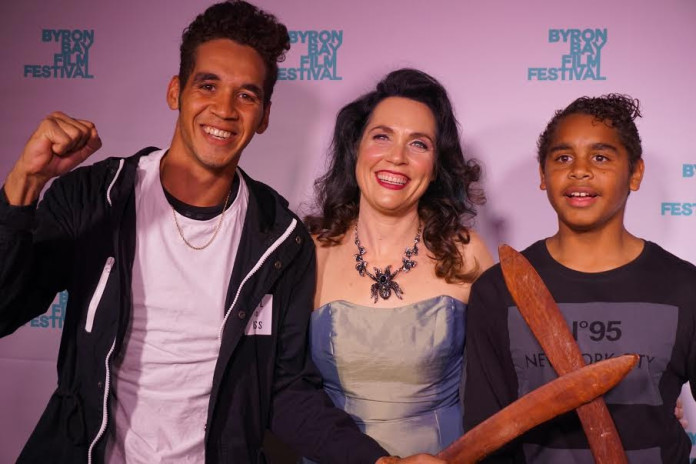 A CAPACITY crowd filled every corner of the Byron Theatre on Friday for the Opening Night film Zach’s Ceremony, and the gala party which followed.

Filmmakers, sound designers, post-production gurus and film lovers rubbed shoulders with screen and stage identities Lincoln Lewis and Bernard Fanning, and film veterans such as Jack Thompson, a long-time supporter of the festival.

The charming and challenging documentary about an Aboriginal boy’s evolution into manhood through ancient initiation rituals had the packed house on its feet at the end – and even before the film, when Zach and his young brother Bailey performed a traditional dance.

“Zach’s Ceremony was an absolute hit with the opening night audience,” said Festival Director J’aimee Skippon-Volke. “It’s a work that means so much to so many people.”

Zach, now a charismatic young man, spoke about the journey the documentary had taken him on, and paid tribute to his little brother, who had been anxious about performing for the first time without dad Alec Doomadgee alongside them.
Alec, now a Byron Shire resident and the driving force behind the film, is in New York at the Margaret Mead Film Festival for a screening of Zach’s Ceremony.

Zach’s grandmother also features in the film and her appearance on stage at the Community Centre added to the rapturous reception.

Hip-hop artist Patrick Mau, who had travelled from his home on Thursday Island for the event, opened proceedings with a performance of music from the film.

Zach’s Ceremony is screening again on Sunday, October 23 at 2pm at the Byron Community Centre.

Between now and then thousands of people will be enjoying the remaining 100 plus films, and special events at the festival – the biggest yet in its 10-year history.

Special events include a ride on the Magic Bus from Byron Bay to Brunswick Heads Picture House and back to see Going Furthur, a celebration of the first West Coast hippies aboard the psychedelic bus Furthur, with the film’s creator, Lindsay Kent also on board.

Monday morning you can join the filmmakers and actors at Beach restaurant, Clarke’s Beach, when they will be interviewed by Joanne Shoebridge for an ABC Outdoor Broadcast.

Music lovers are invited to the free screening of 20 of the year’s best music videos at Byron Bay Brewery on Friday , October 21 at 9.30pm.

BBFF16’S OPENING NIGHT FILM WILL BE SCREENING AGAIN ON SUNDAY OCTOBER 23 AT THE BYRON COMMUNITY CENTRE
Opening Night film, Zach’s Ceremony receives standing ovation and will be screening again at the Byron Bay Community Centre on Sunday the 23rd of October. Don’t miss out!

Zach’s Ceremony is both an intensely personal look at Zachariah Doomadgee and his father Alec’s sometimes fraught relationship and a celebration of the profound and joyful spiritual practices of the Gangalidda, Waanyi and Garawa people.

The film traces Zach’s evolution from a serious 10-year-old boy expressing his wish to learn about cultural practices on his father’s country, through his teens and into an independent young man. Living in Sydney, a pale-skinned black kid copping racist jibes from both sides, Zachariah longs to become an elder – but he’s an adolescent, chafing under the heavy yoke of his dad’s well-meant guidance.

Their scenes together have an uncomfortable intimacy: love, expectation, anger surface as the universal father/son theme is played out.

The film was Alec’s concept, and much of it was shot at their home, none of it rehearsed or scripted. Alec says of the film, “It was something I grew up wanting to do, to show in an artistic, graceful manner how unique our culture is, and also how spiritually important it is for us.”

Zach’s Ceremony will leave you inspired, touched and uplifted.

For programme details and to buy tickets or a Flexi-Pass, visit bbff.com.au. Downloading Byron Bay Film Festival app lets you book your flexi-pass sessions, mark your calendar or purchase tickets. You can also buy in person from BBFF’s venues.