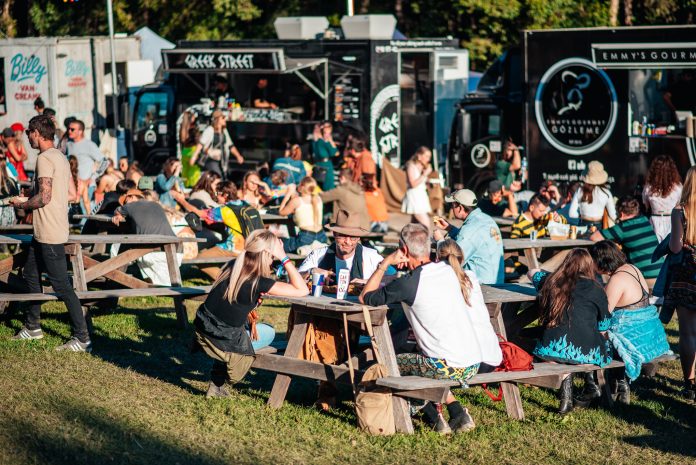 With just over three weeks to go until the almighty reunion that is going to be Splendour in the Grass 2022, the festival is thrilled to reveal the exciting new destination bars ready to wet your whistle come Friday 22 – Sunday 24 July. Adding a bunch of new additions to the Splendour spaces you already know and love, the festival will host an array of exciting watering holes – some of which will feature lineups from the hottest acts and DJs in the world right now.

Get your dancing shoes on as you celebrate all the colours of the LGBTQI+ community at RAINBOW BAR. Picture your ultimate OTT disco ball and glitter fantasy and you’ll be getting close to the utter fabulousness that is Splendour’s fiercest new dance club. The colourful bar will feature programming by some of the hottest taste makers in the country… 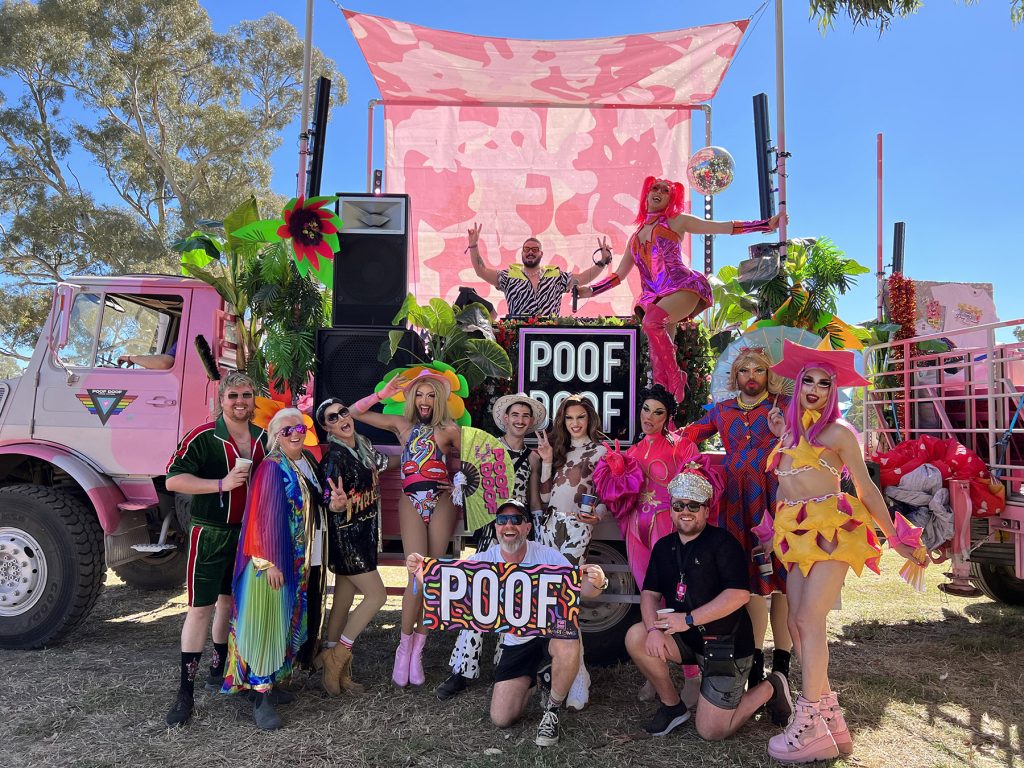 Step aside Big Banana, there’s a new fruit in town: CANNED FRUIT. Putting the ‘camp’ in camping festival, Sydney’s inner west LGBTQIA+ party starters CANNED FRUIT will be serving up their signature bops in the Rainbow Bar on Thursday 21 July.

GiRLTHING was born in 2008 and changed Sydney’s LGBTQIA+ scene for the better! Launching as Sydney’s first “indie queer girl social” on Oxford Street every Thursday, GiRLTHING has since frequented every major club in Sydney, not to mention Melbourne, Brisbane, and Perth. It’s safe to say she’s turned into a bit of an institution over the last decade. GiRLTHING creates safe spaces for queer art galleries, underground warehouse parties, lesbian skate competitions, sweaty club nights and more and will take over Rainbow Bar on Friday 22 July.

Since bursting onto the scene in 2011, POOF DOOF has cemented itself as THE premier queer dance club brand in Australia. With an unwavering focus on music, POOF DOOF quickly established itself as the go-to night out for any queer (and queer allies) with an appreciation for quality dance music and late nights. POOF DOOF and its Pride Patrol stage activations have toured mainstream events providing safe spaces for queer patrons and showcasing the best LGBTQIA+ talent in the country. Get ready as they take over RAINBOW BAR on Saturday 23 and Sunday 24 July, and keep an eye out as POOF DOOF superstars wander around the festival grounds too! 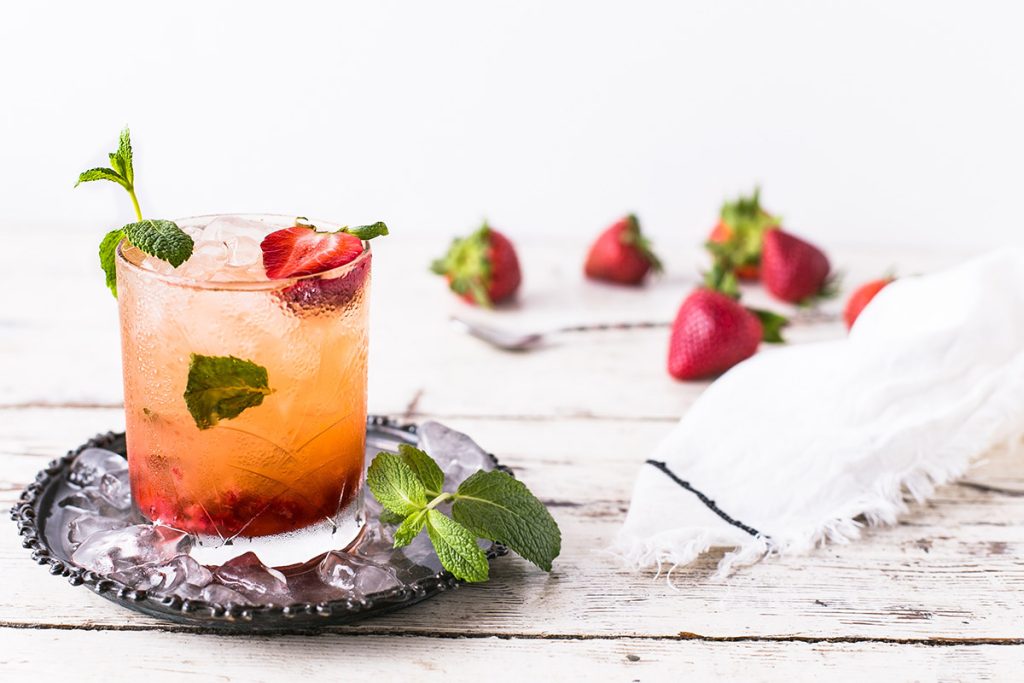 If your body is your temple, step into TEMPERANCE BAR, Splendour’s brand-new non-alcohol bar with comfy courtyard and bespoke mocktails carefully curated by expert mixologist MARC ROMANIN. With over 10 years of experience within hospitality in Australia and close to a decade of experience in drink strategy execution at large events and music festivals globally, Marc is highly regarded in the industry and has consulted some of the largest hospitality groups and events.

Marc has designed drink menus for brands across Europe, America, Asia and the Middle East and assisted in the development of non-alcoholic cocktail menu’s for some of Australia’s largest and leading hospitality brands including Trader House Group (Gimlet, Marion, Supernormal, Cumulus Inc, Cutler & Co) and the LUCAS Group (Chin Chin, Society, Baby, Kisume, Yakimono) – FANCY! See what Marc has in store when he showcases his passion for mixology at Splendour’s TEMPERANCE BAR and sip on his perfectly designed menu that will leave you feeling clear and fresh all weekend long.

Be sure to sign up to the badge draw for a chance to get your hands on prize packs stacked with BBB merch and goodies from Thrills Co and Byron Bay Brewery’s art curator, Jacob Boylan. Drawn daily from 3pm at Splendour’s Byron Bay Brewery Bar. 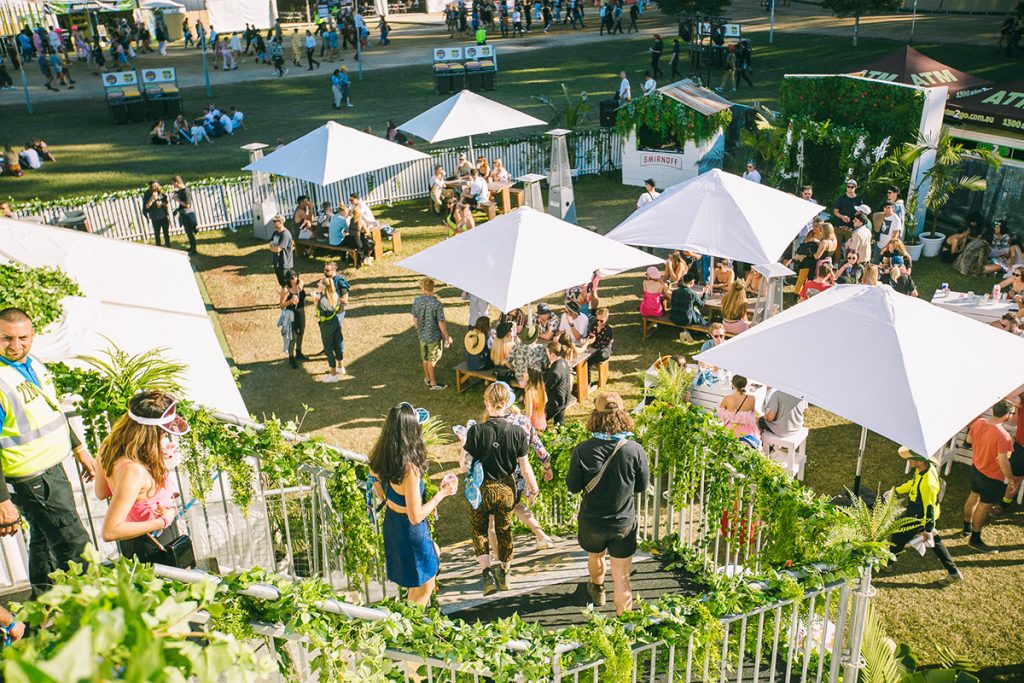 SMIRNOFF SELTZER SPRINGS will be bringing perfect Palm Springs vibes by day and Vegas neons by night. Outside in the desert-inspired, cacti-filled oasis, festival-goers will be treated to live music on the Cabana Stage in the day, including Smirnoff-backed R&B pop artist Adrian Dzvuke. Inside, expect a full DJ lineup curated to bring the vibes…

Hidden in plain sight, seek and you shall find. RED BULL UNFORESEEN… 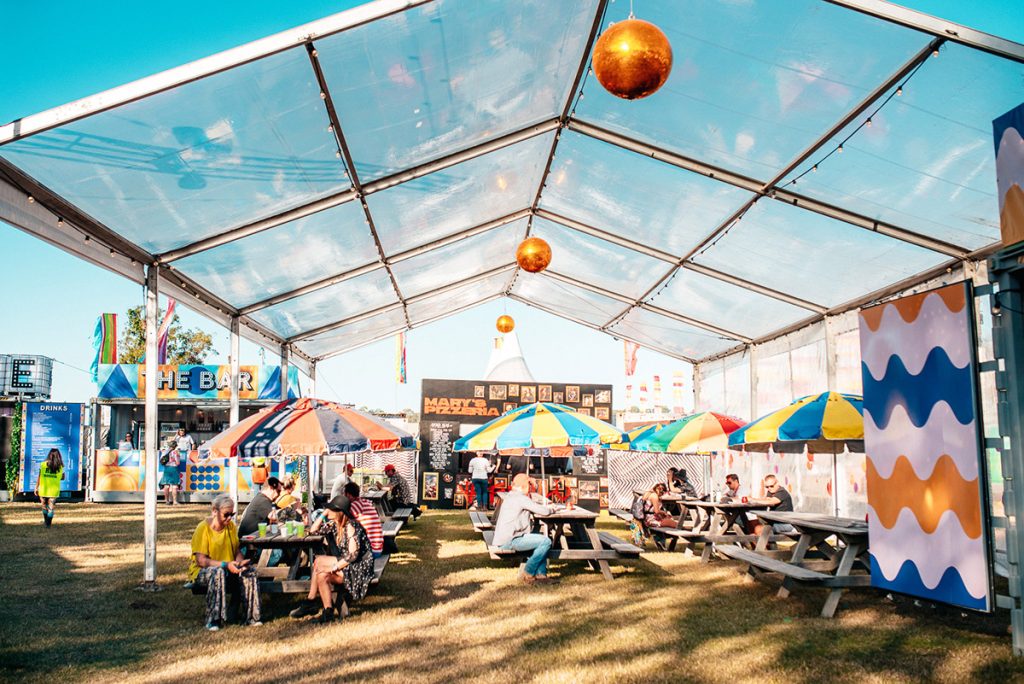 When it’s time to nosh you’ll be spoilt for choice. Feeling boujie? Snag yourself a preloved VIP VILLAGE ticket and you’ll be enjoying local, seasonal and ethically sourced produce from iconic Byron Bay restaurant BARRIO – led by Chief of Food David Moyle (Franklin, Longsong, Harvest, The Lighthouse). Or munch on the famous Detroit style square pizzas from the Jake Smyth and Kenny Graham, the stars behind Sydney’s burger institution MARY’S – exclusive to the VIP VILLAGE.

Throughout the festival you’ll find delicious and nutritious treats to satisfy your hungry appetite after all that dancing. Pull up at the TRUCKSTOP where you’ll dive headfirst into a smorgasbord of big yums. Tuck into a taco from Beatbox Kitchen & Taco Truck from Melbourne Snack King Raph Rashid, scoff a pizza from Sons of Napoli, fill up of fried chicken from Birdman or snag a toastie from Pocket Rockets.

There’ll be Filipino BBQ from Hoy Pinoy, Samaras Lebanese, Emmy’s Gozleme + so much more. Scope out 2019’s best in show, Raijin Japanese and Mamacitas Mexican and wash it all down with dessert from Byron Bay Donuts. Once you’ve taken your tastebuds on a journey and filled your tum with food, it’s time to vote for your Best in Show 2022. Vote via the Splendour App for your chance to win $100 worth of Splendour Dollars to spend anywhere*! (*excluding merch)

Now get ready to drink and eat your way around Splendour 2022. It’s only a few weeks to go until we’ll be feasting together at North Byron Parklands!