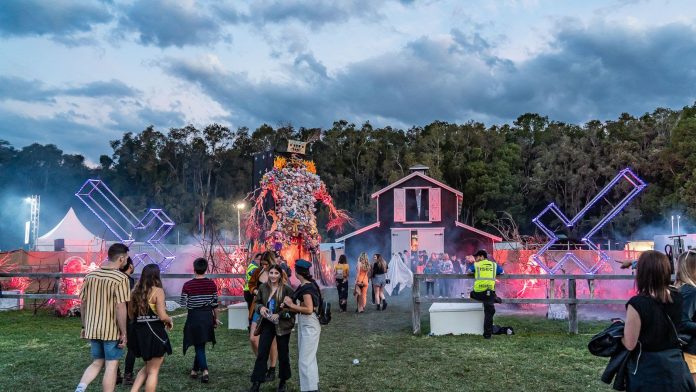 Buckle up! Splendour Arts returns to North Byron Parklands with a whole new suite of artworks, ready to take you on a journey through time, space and everywhere in between.

Prepare to get lost (and possibly never return) as you partake in performances, workshops and shameless selfie taking amongst an array of installations and immersive experiences.

HIROMI HOTEL: BRAIN FLOWER
Hiromi Tango
At a time when human relationships are being subsumed by digital communication, Hiromi Hotel encourages participants to slow down and reconnect through reflective acts of art-making, conversation, and the rich layers of sensory engagement that art provides. Through colour, texture, movement, sound, and even smell, Hiromi gently transforms how we relate to our environment and each other. Shack up at the hotel and get involved in workshops and performances each day at Splendour. This project has been assisted by the Australian Government through the Department of Communications and the Arts Festivals Australia program.

THE BELLS
5AngryMen
‘The Bells’ is a spectacle of enormous endurance. It demands incredible physicality and discipline from the performers. Crossing many performance genres, The Bells is a task. An enormous creative task that is being tackled by the ensemble. The nature of the task seems elusive – perhaps the performers themselves are unclear what it is – however they attack their work with a manic, unwavering belief. The results are at once comic, triumphant, tragic and absurd. But no matter what, The Bells must be rung.

THE ROCK ROCK
Cool Shit
They’re back! From the team who like to blow shit up and who brought you Happy Kanye and Snoop Dogg Hot Doggs comes the jabroni beating, pie eating, trailblazing, eyebrow raising people’s champion! Standing in at well over 32 feet tall, he’s not very fast and he’s not at all furious. Cool Shit and Splendour present: The Rock Rock!

FACE OFF
Laith Mcgregor
Robert Cornelius took the OG ‘Selfie’ in 1839 through experimentation. Without knowing it, Cornelius had conceived a global phenomenon which has now taken on a life of its own. We’ve all shot a shameless selfie or 50 in our life. Gather together at Splendour and we can create a social narrative of epic proportions by using the ‘Selfie’ as a mode to collect and reconfigure a communal consciousness. Strike a pose, let’s do this…

GATEWAY 3
Sam Songailo
Pass through to the other side with the third instalment of Gateway. Influenced by digital technology and electronic music, Sam adopts algorithms and the concepts from these disciplines to shape his approach to both physical and pictorial space. Highly immersive and realised on a monumental scale, Sam’s work accentuates the compositional elements of line and space in a form that recalls both the modernist grid and digital networks.

HYPNAGOGIC
Lee McConnell
Travel through the tunnel on your way to Splendour and see a bold character awake by day and take full form at night. An illuminated spread of viewers looking at viewers, Lee’s tunnel mural portrays a moment between consciousness and sleep beyond what is framed in the Splendour in the Grass 2019 poster artwork.

MIRROR PALACE
Andy Forbes
When you go to a festival you like to look the part, right? Glamour and charm is at the forefront of Mirror Palace, a creation of seemingly random objects that convey more than one meaning; a contradiction that begs the questions, what lies beyond an appealing reflective surface?

SPLENDOUR IN THE GRASS OFFICIAL RESALE
Via Moshtix