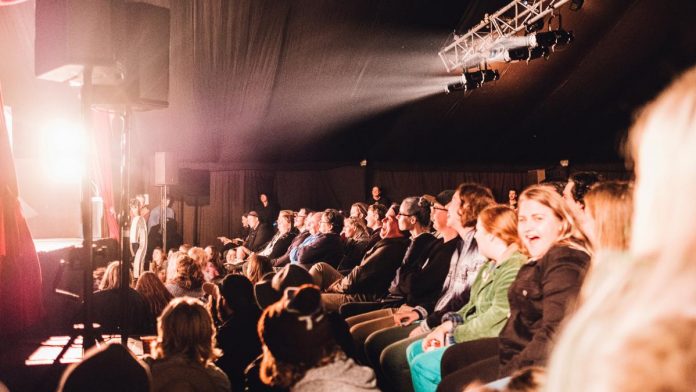 Now in its ninth year of brain-broadening goodness, the Forum and its crew of industry heavyweights and fascinating thinkers will once again give your brain’s left-side some serious stimulation.

Put your thinking felt hat on and join the likes of Henry Rollins, Marc Fennell, CHVRCHES’ Lauren Mayberry, Q&A’s Tony Jones and many more for three days of deliberation, speculation and contemplation as they tackle topics from all corners of the social spectrum. Cyber hacking? Apocalypse fatigue? Book club? You want it. The Forum’s got it!

SPLENDOUR FORUM PROGRAM
FRIDAY
10am-12pm Deadlock TV Series World Premiere & Panel
10am-11am
Screening of Deadlock
Locally-made drama series Deadlock (auditions were held at Splendour Forum in 2016) crashes though the incredible highs, joys, heartbreak, camaraderie, laughs and bittersweet sorrow of what it is to be a teenager.11am-12pm
Deadlock Panel
Hosted by comedian Cameron James, a panel including Deadlock’s creator, writer and director, and cast members looks at the highs and lows of youth growing up in regional Australia and the culture of Byron Bay.12.30-2pm
Panel: Consent in the Post #metoo World with Henry Rollins, Tracey Spicer, Stella Donnelly & more
The #metoo movement has thrown up all sorts of questions, including the often-complex nature of sexual harassment, assault and abuse. In this frank conversation we look beyond #metoo to what happens next – how do we navigate intimate, social, professional and cultural spaces?

2.30-4pm Panel: Cyber Hacking & Stolen Elections: Is Trust Dead?
Silicon Valley’s questionable ethics are finally being challenged – but is it too late? A slew of high profile breaches has left millions of people’s data exposed to the steamy hacker underworld in the last year. Yet the Government is about to pass a law that your secure messaging apps have to be breakable by design so governments can read them. What could possibly go wrong with that? Hear the 2018 Splendour Hackers make sense of it all.

SATURDAY
10-11.30am Panel: Saturday Morning Book Club with Marieke Hardy and special guests
Renowned bibliophile and co-host of ABC’s iconic The Book Club for 11 years, Marieke Hardy brings together lovers of words, literature and all things bookish. Alex Lahey, comedian Broden Kelly (Aunty Donna), Opera Queensland Artistic Director Patrick Nolan, rock ‘n’ roll graphic artist Paul McNeil and ABC journalist and Four Corners’ host Sarah Ferguson will nominate ‘The Book That Brought Me Back To Life’ and enjoy a Saturday morning discussion exploring the connections between their Art and the novels that have inspired them.

12.30-2pm Panel: The Pin Presents: Third Culture Kids with Nkechi Anele & Lucille Cutting with guests Ziggy Ramo, Emily Boadu & Michael Hing
The Pin is a website exploring race, identity and culture in Australia from the biracial and bicultural perspective. Join Nkechi Anele and Lucille Cutting as they chat to hip-hop artists Ziggy Ramo and Ebony Boadu and comedian Michael Hing about what it means to be a Third Culture Kid and its impact on the way they see themselves and their art in Australia today.

2.30-4pm Interviews: Marc Meets Rollins, Alex & Lauren
The Feed’s Marc Fennell (SBS VICELAND) interviews three of the world’s most interesting musical performers live on stage. Henry Rollins, Alex Kapranos from Franz Ferdinand, and Lauren Mayberry from CHVRCHES will each open up about their lives, music and the issues that matter to them.

SUNDAY
10am-12pm Film & Panel: APRA AMCOS Presents: Her Sound Her Story
New music documentary Her Sound Her Story unveils the personal experiences, histories and significant social impact women have had in the Australian music industry over the past 50 years. The unique, all-female narrative features conversations with more than 40 women. After the film, join ABC broadcaster Robbie Buck as he chats to the film’s creators, along with special guests Hannah Crofts (All Our Exes Live In Texas)  Alice Ivy’s manager Zac Abroms.

12.30-2pm Panel: Apocalypse Fatigue and the Planet Gamechangers
We’re all concerned about the future of our planet but decades of doomsday predictions have led to what’s known as “apocalypse fatigue.”  Join Linh Do, the Australian head of The Climate Reality Project, as she chats to, That Sugar Film’s Damon Gameau, marine biologist and plus-sized model Laura Wells, and superstar astrophysicist Professor Alan Duffy, about how they reframe the debate.

To ask a question, email qanda@splendourinthegrass.com or tweet using #qandasitg

Never trust an atom… they make up everything. But you can trust us when we say that The Science Tent will blow your mind again in 2018!Splendour has teamed up with Southern Cross University and some of the country’s best communicators to bring you an explosion of rocket fuel for your brain and a program jam-packed full of stuff you didn’t even know you wanted to know! Do sharks like music? Are you smarter than a slime mould? Why are there millions of serial killers lurking inside of you? Not even Siri will know what’s up!

Get ready to connect with science in new and awesome ways across Friday, Saturday and Sunday at Splendour 2018. Here’s just a few highlights…

THE GREAT SCIENCE SQUABBLE
With Prof Alan Duffy (Swinburne University) and Laura Wells
What happens when you put a bunch of scientists on stage and throw questions at them, where there’s no right answer and nobody is keeping score? We’re not sure either. But we’ll find out at The Great Science Squabble. The greatest science quiz show to hit Splendour since never.

SAVE THE BOX! BREAK THE TABOOS AND LOOK AFTER THE LADY GARDEN.
Ruth Gordon / Australia New Zealand Gynaecological Oncology Group
Beaver, coin purse, front bottom, lady garden, va jay-jay, vertical smile, map of Tassie… Now that we’ve got your attention – 16 women are diagnosed every day in Australia with a gynaecological cancer and four women lose their life. These women are rarely talked about, but lives depend on being able to recognise the symptoms and having the best treatments to improve lives and survival. Find out what you need to do to look after your lady garden at The Science Tent!

WHAT DOES SOUND LOOK LIKE?
Celeste de Mezieres / Griffith University
Ever wondered what your voice looks like? Delving into the vibrational phenomena known as ‘Cymatics’ and the physics behind the mechanical waves of sound, we’ll explore its components and how it can be transformed into an artistic visual display. Yanny or Laurel? When it’s time to give your ears a break, let your eyes do the listening and behold the sight of sound at the Splendour Science Tent.

THE COSMIC STORY OF YOU
Alan Duffy / Swinburne University
Almost certainly you know when and where you were born, perhaps even something of your family tree going back generations.  But your history is so much longer and more complex than that. Alan Duffy will take you through the cosmic story of you, in which you have journeyed through exploding stars, crashing galaxies and spent billions of years adrift. All of this history has resulted in you being you, but only for now and never to repeat.

Lovers of LOLs, this one’s for you. When the sun begins to set at North Byron Parklands, Splendour Comedy Club fires up with the hottest laughter-masters in the comedy biz!Pull up a chair on Thursday, Friday, Saturday, and Sunday evenings, but don’t expect to stay in it for long. The best comedians in Aus have been tasked with ensuring you’ll be ROFLMAO-ing your night away, as they get their stand up, sketch and straight-up hilarious mic slaying on at Splendour Comedy Club.

Keep up (if you can) with the surreal, totally unique and highly explosive sketches of Aunty Donna on Friday or Sunday, or forget about yourself for a hot minute and wallow in the self-depreciating stand-up of Becky Lucas. Plus there’s Matt Okine, Tripod and so much more…