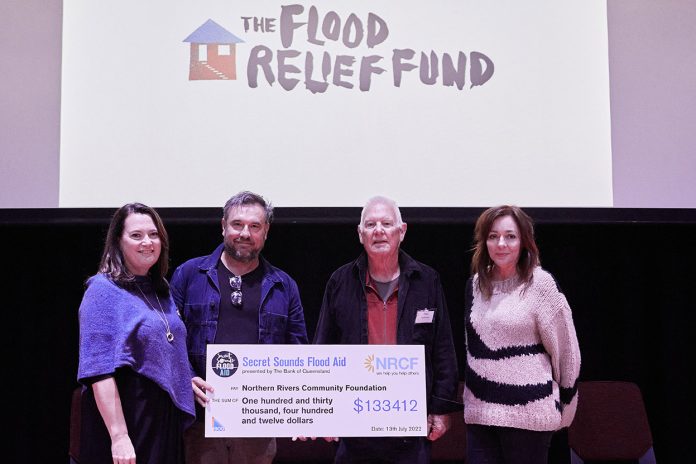 Earlier this year, the Northern Rivers of NSW and Southeast QLD were devastated by a natural disaster of previously unimaginable magnitude and severity.

Soon after, Secret Sounds launched Flood Aid, a fundraiser to help rebuild and assist with the healing of these communities.

Secret Sounds is very proud to announce that Secret Sounds Flood Aid, presented by Bank Of Queensland raised a grand total of $667,100.

“Flood Aid is deeply personal for Secret Sounds as many of our team live and operate businesses in the local areas that were directly impacted by these devastating floods. Even now, nearly 5 months on, the pain is still being felt right across the region. We are all very proud to contribute these funds that we hope will provide some support to help local families and towns get back on track” said Secret Sounds Co-CEOs Paul Piticco and Jessica Ducrou.

The funds raised have been divided amongst the following charities:

“We would like to take this opportunity to thank all participating charities for their wonderful ongoing help and support, being at the frontline and at the very heart of the communities that have been hardest hit. Their teams are an inspiration to us all” said Piticco and Ducrou.

Secret Sounds is hugely grateful to Flood Aid’s major Sponsor, Bank Of Queensland for their generosity and support. Wanderlust also made a big contribution, thank you!

Martine Jager, BOQ Group Executive Retail Banking said, “It’s been more than 5 months since the tragic flooding in Queensland and NSW and it never gets less heartbreaking to hear the stories of devastation from these communities.

“We’re grateful for the opportunity to be a part of this incredibly important partnership. The Flood Aid team worked hard to make sure these funds directly helped those impacted by the floods while also supporting our treasured Australian music industry.

“It’s amazing what we’ve been able to achieve together, and the team and I will continue to find ways we can help,” Ms Jager said.

“We continue to be amazed by Australia’s music community and their willingness to lend support, even after the very difficult time they have faced over the past few years. All contributed their time and music for free as did the fantastic live music venues that held the events and the production staff” said Piticco and Ducrou.

The Flood Aid online auction was full of generous donations from businesses and individuals offering an array objects and experiences. Thanks to all of them for their generosity. A cheeky limited edition Where The Muddy Hell Are You t-shirt quickly sold out, raising the balance of the funds.

As Splendour in the Grass prepares to open its doors at North Byron Parklands for its 20th anniversary event, the event team sends huge love to the local community and a big thank you to all of the people who attended the gigs, purchased a t-shirt or participated in the online auction.