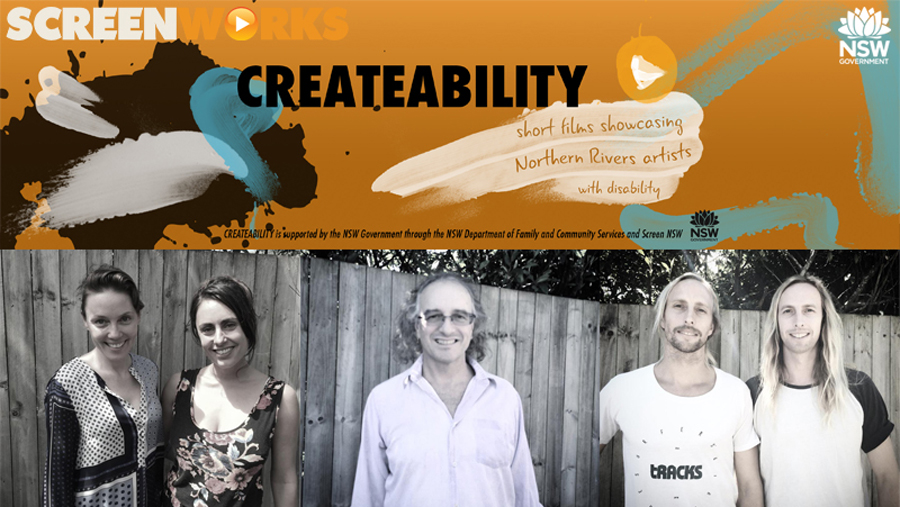 Following a difficult selection process from an impressive range of submissions to Screenworks’ Createability project, three Northern Rivers Producer / Director teams have been selected to each produce a short documentary film profiling the work and life of artists with disability living and creating in the region.

Screenworks General Manager, Ken Crouch has been thrilled with the interest in the project – “all of the submissions were of a very high professional calibre, so narrowing the applications down to just 3 teams was extremely difficult. Just as difficult was deciding on which artists to profile – but, what a nice challenge to have!

“Createability is all about providing local artists with disability the opportunity to challenge community attitudes and misconceptions that form barriers to social inclusion, and we’re really proud that Screenworks is able to offer the opportunity to produce these short films to local professional screen workers in our region” said Mr Crouch.

After hours of assessment and deliberation, the successful filmmakers / production teams selected for the Createability Project are:

Having worked as a filmmaker since the early 1980’s, Andy Bambach is looking forward to working with local artist, Peta Lipski. “I am really excited to be involved in the Screenworks Createability project. It’s a fantastic opportunity to work with Peta Lipski and showcase her amazing hand-made puppets, each an original character with a distinctive story. Peta is an inspiring artist and performer living with a disability who follows her artistic passion and dreams.”

Jonatan and Sebastian have established themselves as popular local filmmakers having worked on many high profile local productions including the Youtube viral hit, I’m Happy. They are looking forward to profiling young local musician, Lydian Dunbar. Lydian is an electronic music artist who also works in theatre and cross platform work that has been exhibited in Regional Galleries in Australia. Lydian joined the inclusive electronic pop band Tralalablip in 2010. Tralalablip have recently been invited to undertake a residency in Germany later in 2015.

Poppy and Sophie are currently in discussion with several Northern Rivers based dancers for their film. “We are thrilled to have been given this opportunity to create a short documentary for Createability. In collaboration with Screenworks and a small team of dynamic artists we will be creating a highly-cinematic dance film illuminating the work of a gifted, local performer”. Full details about Poppy and Sophie’s film will be released in the coming weeks.

Screenworks will be profiling the artists who have been chosen to tell their stories on the Screenworks website, social media and the local media – stay tuned for further updates on this exciting project.