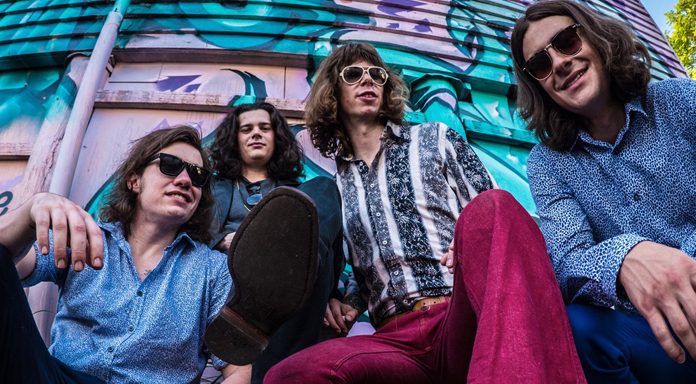 It is safe to say that Port Royal are quickly becoming one of most demanded emerging rock acts from Brisbane. The band made huge waves in 2017 with their two single releases. ‘Get Heavy’, released March 17 came in at number #2 on the 4ZZZ Hot 100 of 2017, smack bang in between Flangipanis at #1 and WAAX at #3.

‘Pinch-Hit’ followed in September which had them receive further praise as they toured interstate for the first time, that was quickly followed up by an 11 date tour fittingly entitled the ‘Don’t Stop Movin’ Tour’ that stretched from December to February 2018.

Now with their new single ’Rock & Roll Is Dead’, these royals give a nod to everything that was loved about the likes of Jet, the Hives and the Vines in the early 2000’s rock revival while never straying far away from the iconic blues formula of the 70’s golden age of rock.

In regal form with bustling anthemic choruses, beseeching rock & roll licks and a barrage of hits, ‘Rock & Roll Is Dead’ is their most comprehensive, fetching and accessible release to date.

The track while being a fun and optimistic anthem it ferments a talking point for today’s music industry with the leading chorus lines stating, “They say, Rock & Roll is Dead”, created to be a completely ironic and ballsy statement to the cynical haters of the genre which they’ve confronted.

In contrast to this, the track touches on throwing away their money on something that poses a risk and never switching off from what they truly desire. The lengths in which the band went to to get this new single together is a clear example of this. In the recent month, a conflict surfaced which delayed the release of the track — initially to be released in March — between Lawson Doyle and an outside co-writer, where the two parties were arguing their own direction of the song.

Fortunately for the band, this song-writing attribute has been resolved before it could elevate into a legal battle which was threatened. Regardless, the matter has highlighted a deeper and darker element of the music industry where Port Royal, feeling burnt and sapped, are now extremely cautious of outsiders, the importance of contracts vs friendships, and the obstacles that will challenge them as a collective throughout their careers.

Port Royal have undoubtedly faced struggles but will continuously, like any hard-working team, hurdle these brick walls that get in their way of releasing rock & roll. Moving forward, they are excited to be finally be releasing ‘Rock & Roll Is Dead’ and announce their 15-date tour through May and June. You can catch Port Royal at Byron Bay Brewery on May 18, for a free show with support by King Coaster, MIND, Garage Sale.