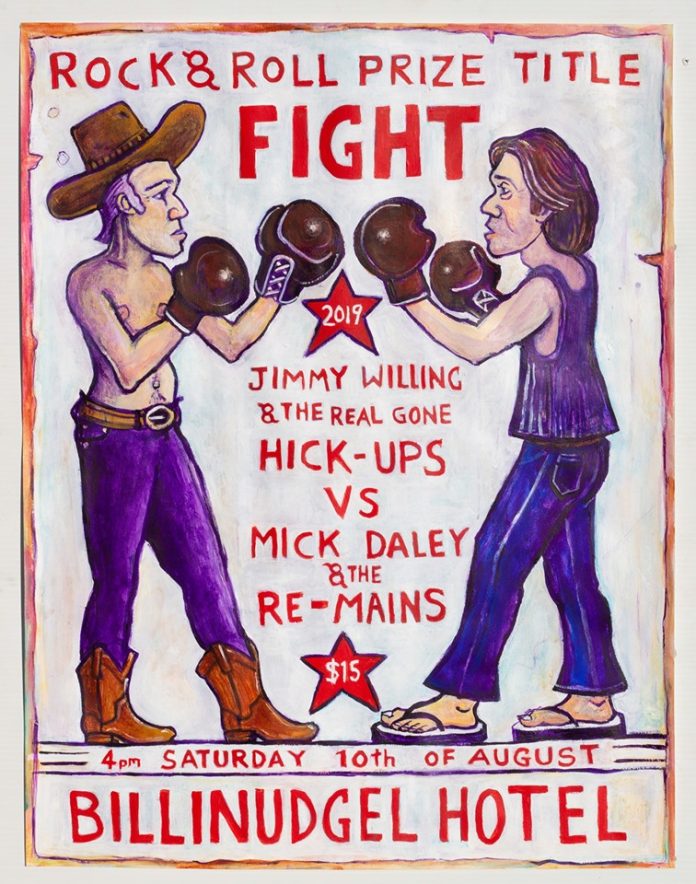 Just Who Will Be King Rooster?
A Rock & Roll Prize Title Fight – Jimmy Willing & The Real Gone Hick-Ups VS Mick Daley & The Re-Mains – One Night Only

The canvas has been scoured of bloodstains, the bunting dusted and the ring lights are spanking new for the prize title fight of the century at the Billinudgel Hotel beer garden on August 10.
Jimmy Willing’s Real Gone Hick-Ups will take on their old sparring partners The Re-mains for the Rock and Roll Prize Title fight of the Northern Rivers.

The Re-Mains have been lying dormant like hibernating swamp frogs, only occasionally coming out to make a racket in the summertime. But they’ve answered Jimmy Willing’s challenge and emerged, dripping in slime, to recreate the great country rock and roll challenge of our times.

Lethal Leigh Ivin, legendary steel and guitar maestro, has been dusting off his instruments, while also in Tamworth, drummer Grant Bedford, survivor of the great Barkly Steer disaster, has been planning new and devastating paradiddles. In Sydney the great Tom Jones has been honing his bass phenomena, while frontman Mick Daley has gone shopping for new and more outrageous shirts. And in really big news, banjo maestro Shaun Butcher, AKA Uncle Burnin’ Luv, has agreed to come out of semi-retirement in Townsville and grace the stage.

The Re-Mains know this is gonna be a tough one. The Real Gone Hick-Ups have been busy, licking themselves into shape over the years. They’re a crack outfit, hardened after years under the iron discipline of Jimmy Willing’s rock and roll regime.

Mill worker Nirvana Glassey plays a mean double bass. Blues archivist Doctor Davey Bob Ramsey is a master of his craft and has insider knowledge, having himself survived The Re-mains near fatal Barkly Steer disaster in the depths of the Northern Territory. Clancy Rocca Robinson is a heavy metal monster, who has transmuted his double-kick chops into a rockabilly finesse that’s the envy of every mutton-chopped Cadillac fetishist on the planet.

But fifteen years on the road have taught The Re-mains one thing. You’re only as good as your last gig. And the last is always the best. So while the Hick-Ups work that one out The Re-Mains will be shaping up for the big left hook that’s gotten them out of trouble so many times before.

Get on the Big Red London Bus early on August 10 to take your places ringside when the rock and roll kicks off at 4pm. The bands will swap sets till they’re both bloodied but unbowed, in a showdown that will leave the audience gobsmacked, danced out and ready for hot toddies. No matter how it pans out, rock and roll will be the winner.

Tickets are now available from the Audio Room, Lismore.