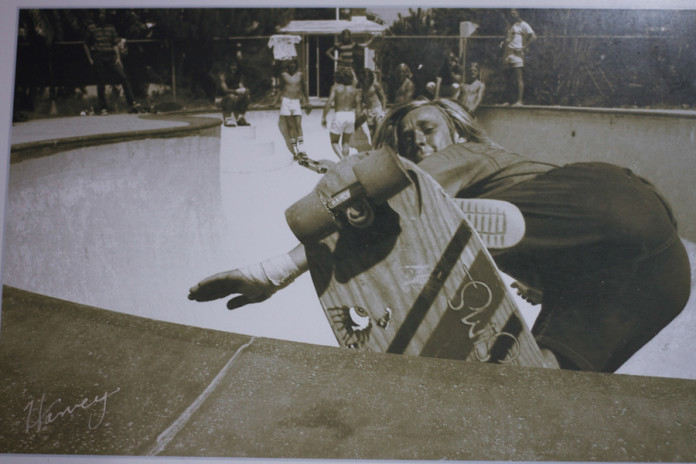 In a time before helmets and knee pads with just raw talent and their skinny boards, A young 15 year old kid name Sean Strain and his dad had been turfed out from their home and had moved to El Rio way out the back of Ventura. As luck would have it, at the back of this dilapidated property was a large a large kidney shaped swimming pool. Diving board at the deep end, it had nice curves but several holes in the walls.

Sean phoned skating mate Richard Van Der Wyk and they put in some long hours shovelling.The two of them skated the El Rio pool for the very first time by candlelight. Now they had somewhere to skate and it was the beginning of what local skaters could call their own. The following day, Richard brought Stevie Monahan with him, later on Lonnie Toft, Gordy Lienemann, Mike Reser and Davey Miller joined the crew.They say Jay Adams had his first pool skating experience there and took to the pool like a fish to water.

“For me and my camera the sweeping curves of the coping created many interesting shadow lines in California’s summer sunshine. But those curves really allowed these talented skaters to showcase their amazing abilities and individual styles.

The black & white photos I shot in 1975 have been stored away for years but now through them, you can get insight into a time that was the birth of pool skating. ” Richard Harvey

Adventures in the Deep End
A photography exhibition by Richard Harvey
From Saturday, December 5 at the Stone & Wood Brewery