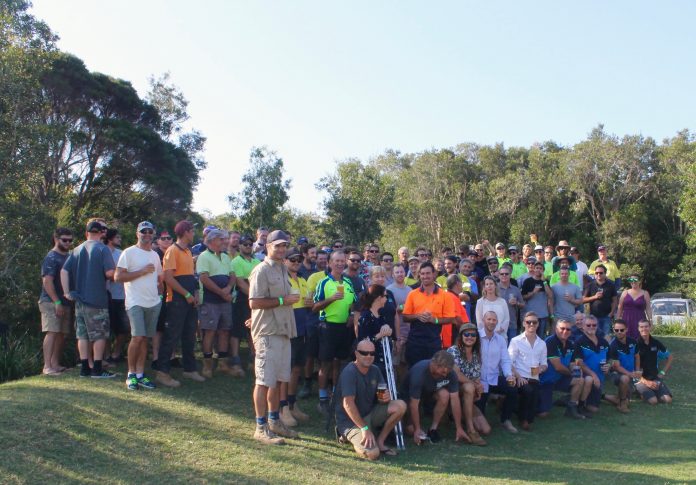 After seven years, development at Elements of Byron is coming to an end. The beachfront resort at the end of Bayshore Drive in Byron Bay opens 99 new villas on September 29 and with most of these sized between 98 and 111m2, they will be catering for families. And at the end of October construction will wrap up on a new adult only pool with swim up bar, timber childrens’ adventure playground and half a dozen leisure areas.

“Sincere thanks go to our neighbours who have been patient with the construction program” said Development Director Jeremy Holmes. Holmes and his team, led by Construction Manager Darren Jarvis, took the construction of Elements of Byron’s second stage in-house rather than outsourcing to a builder. “It really enabled us to better manage impacts on neighbours and resort guests, as well as to take full responsibility for quality and cost” outlined Jarvis.

Yet the projects’ completion is not good news for all. The two stage resort development program has provided sizeable ongoing business to the local construction industry. The direct onsite construction spend has reached $95 million, with $30 million of this on Stage Two*. 180 businesses, the vast majority of these from the Byron, Ballina, Lismore and Tweed areas, have been contracted to the project. Of these, 83 businesses were directly employed on-site with the remaining firms providing construction related services from building materials, plants and signage to engineering, lighting and technology.

While construction workers are steadily departing, the opening and operation of Elements of Byron Stage Two will create a further forty new hospitality jobs, with a number of these yet to be filled.

“I am overwhelmed with gratitude to my North Byron Beach Resort team” said Jeremy Holmes. “Particularly Darren Jarvis, Guy Ruthven and Abel East, who have collectively managed the project from inception to completion. We’ve made a lot of friends along the way.” Last month the North Byron Beach Resort team were awarded the Urban Development Institute of Australia Award for Excellence for development across regional New South Wales and Canberra for Elements of Byron, beating every development outside Sydney.

Across the fifty acre Elements of Byron site the final building footprint is only 3.8%, or less than 10% of the developable area. “Nature is and remains the star” said Holmes.

Managing Director of Lismore’s Premier 3D Painting Tony Durheim has had his team on the job for the past twelve months. Tony played in the NRL for the Gold Coast for nine years before retiring seventeen years ago to come home and take over the family business. He also runs the Lismore Paint Centre and Paint and Trade Supplies in South Lismore and is a Director of the NRRRL, which runs the local rugby league from Tweed Heads to Maclean.

“We currently employ 65 locals and have averaged 25 of these on site at Elements of Byron at any one time” said Tony. “Our workers are from Lismore, Byron and the Tweed region. It’s a great achievement to get it done and the resort should be very good for our area”.

Eight members of the Ballina Concrete Pumping team have been on the job for over twelve months. “It’s been a good project for us to work on” said Partner Narelle Besseling. “It’s been particularly good for new employees as it’s not a project where there’s a lot of stress. So they can learn the ropes of our business”.

“I think it’s great that there’s heaps of locals on the job” said Blake Donovan from Byron Bay Locksmiths, who has worked on the project since 2015. “I know a lot of the builders and labourers faces from around town. And for them to have a job is everything. It’s been a great project to work on. It’s supporting a lot of local families around the place. They were a great bunch of guys to work with. Really and truly. Anything you needed there were always there to help. And it was a very safe site. It was a good job to get and I’m happy that they kept it local. That was what I liked about it. They kept everything local”.

JH Williams Group Byron Bay has been supplying Elements of Byron since 2014. “To undertake the project given the size of it was a pretty big deal for JH Williams” said Manager Anne Ryder. “And because the boys at North Byron Beach Resort had a very good plan of how they were doing it that was a big help to us as well – it helped us greatly because we had a lot of forward vision on what we had to do. They were great to work with. If there were problems it was always “yep we’ll fix that”. And just the working relationship with Wayne, Abel and Guy – them knowing our business and how we operate helped the whole project out. To do something in that size was good learning. It was great for JH Williams to get the job because it kept a lot of locals employed. Kept the boys going”.